Las Vegas-based apparel retailer Zappos rolled out an update to its iOS app today that saw the company fold some neat new features into the mix. There are a few new graphical flourishes here and there (users can now change the animal that appears when adding an item to their cart), and user order history is much more visual than it was in days past — it now integrates images into the mix rather than forcing users to jump into each order.

Possibly the biggest addition to the mix is a feature called negative filtering, which allows users to screen their searches based on what they don’t want to see instead of having to choose a tentative handful of options. Take colors for instance — you may not know exactly what color running shoe you want, but you sure as hell know which ones you don’t, and negative filtering lets you quickly excise the offending hues from your search results. Zappos mobile chief Aki Iida said it was one of the most requested features, and it’s making its first appearance in the iOS app. 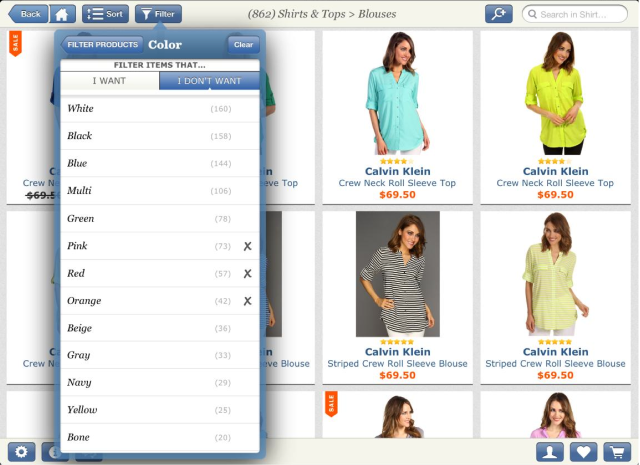 So yes, this is a relatively small update, but the Zappos team is looking at it within the context of a much larger vision — instead of just trying to take the existing Zappos web formula and squeeze in down into a mobile-friendly experience, the company’s mobile team is looking at ways to reinvent the core of the Zappos experience depending on the device the app is running on.

“We’re trying to figure out tablets,” Iida said. “Tablets are more of a discovery device, where people are finding out about products and engaging with them.” Zappos is known for its in-house product shots and videos, which factor largely into the company’s vision for the tablet experience — maybe even more so than on the web. As far as Zappos sees it, when you’re sitting a computer you’re doing a task. When you’re on a tablet, you’re interacting in a much different way: touching, tapping, swiping, all actions that seem to denote the removal of a layer of abstraction between users and the products they’re considering buying.

Meanwhile, smartphones are largely limited by the sizes of their screens (though some companies are eagerly pushing that boundary), so Zappos’ focus there is to streamline the checkout process. That’s not to say that the notion of promoting product discovery has been thrown out the window entirely, but Zappos is more than happy to get out of the way and let users make their purchases in peace.

Perhaps more important here is the flow of features. While Iida noted that developing for different devices should lead to unique experiences, new features pushed on one platform often osmote to others — the team is looking at its presence on mobile devices as a way to unobtrusively test new features before they roll out more widely on Zappos.com itself. That’s mostly a function of engineering resources (it’s easier to rally the iOS or Android team around implementing a single feature than it is to wrangle all the web dev folks), but this free flow of notions and features help to provide a common thread between the sorts of divergent shopping experiences Zappos is trying to build.