Editor’s note: Keith Teare is the founder of just.me and a partner at Archimedes Labs. He is also the co-founder of TechCrunch. Follow him on Twitter @kteare.

Because of Google I/O, this was a momentous week for those of us who are watching the rapid transition that is taking place from desktop computing to mobile, and particularly for those focused on mobile-social as I am because of my job at just.me. Here is my take on what we just witnessed.

Standalone Hangouts. Google announced at its I/O event that Hangouts was to be launched as a separate app from Google Plus, taking personal conversations out from the G+ app and putting them into their own space.

Facebook Home problems. AT&T was reported to have decided to discontinue distribution of the HTC First – the Facebook Home Android phone – due to lack of sales. This comes on the back of publicity pointing to a large number of one-star reviews for the software on the Google Play store.

What is at stake?

There are many common themes and questions that underpin the launch and evolution of Hangouts as a separate app and previously led to the decision to launch the Facebook Home product. These products represent two very similar answers to a common question. The primary question is who will users look to to enable their social communications needs on mobile devices?

To set the context for an analysis let’s acknowledge the elephant in the room that is partially driving these decisions.

Mobile Messaging is rapidly becoming the primary way users engage socially on mobile. Figures released this week imply more than 41 billion messages a day are now being delivered via various “Over the Top”  (OTT) messaging apps. 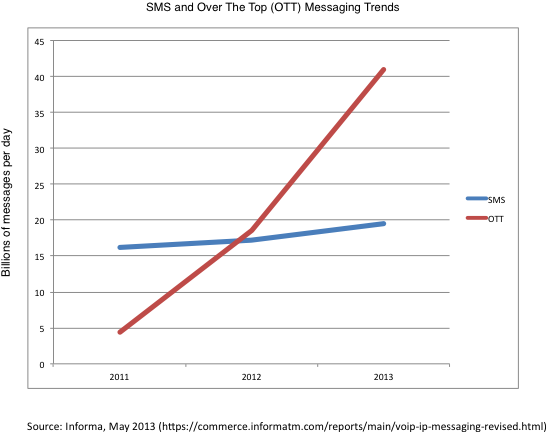 Phones were created as social tools. Smartphones are especially good at being social, integrating text, voice, video and images in an endless number of apps that can serve a user’s needs, and all without the need for a web-based social network.

Users are able to communicate with anybody in their address book anywhere in the world with almost any content mix at any time. This has been compelling to users and has driven the growth of apps like iMessage, WhatsApp, LINE, WeChat, KakaoTalk and some other smaller competitors. Almost 750 million users out of a smartphone population of 1.2 billion are already using these apps.

If you are Google, Facebook or almost any other major provider of social communications platforms originally developed for the web, this move to mobile messaging represents a considerable challenge.

Similar challenges exist from media-sharing apps. As users flock to Vine, Snapchat and, previously, Instagram, the social platforms are challenged to continue to be the primary provider of these services to the growing army of smartphone users.

The other core feature of Facebook and Google+, publishing to an audience for all or many to see, are increasingly becoming activities only a few engage in on mobile — and certainly less often than was the case on the web.

What Is A Platform Provider To Do?

If we look out a few years there is really only one product approach available.

That is to build single apps that embrace and extend the current features of the messaging market leaders — hoping to win users over from WhatsApp, LINE, KakaoTalk and WeChat — while also integrating the features of media sharing, private memory collection and publishing into single unified experiences.

Google and Facebook both seem to be pursuing this approach.

Breaking out Hangouts and going after the messaging audience with enhanced features makes sense. But Google also showed Google Now and Voice Search as possible points of integration for all of its mobile-social features. It’s early days here, but Android clearly wants to find a point of integration for all the users’ needs.

Facebook, with Home, revealed its integrated approach, while under the hood it has Messenger, Camera, Pages and the full Facebook app. Poor as Home’s reception has been, Facebook will certainly continue to deepen and refine its integration efforts and its attempt to be the primary UI a user needs on a smartphone.

Vulnerabilities And Strengths Of Mobile-First Companies

WhatsApp and its clones can be thought of as mobile-first companies. Their apps sit on top of the smartphone, particularly the mobile address book, and just help a user chat to their friends, family or colleagues.  Their success is their simplicity and the singular purpose they have addressed.

Insofar as they are vulnerable, it is due to being very narrowly focused on brief “in the moment” conversations in the form of a chat or instant messaging UI. They have added the ability to include media in those conversations, and some voice-calling abilities. But their goal is really momentary interactions with individuals or groups. Their requirement to have both sides of the conversation install the app is another liability.

Human beings have broader needs that are currently served by other single-use apps. Evernote for private memories, email for longer more enduring interactions, social networks like Facebook, Google+ and Twitter for public statements of all kinds and Path or Instagram for photo sharing. This is a little like the era of Windows before Outlook when apps tended to do only one thing and users used many apps.

These recent moves by Facebook and Google represent early moves by the web-era companies to react to the successes of the mobile-first messengers. They certainly do not represent end points in any way, impressive as they are. And there is plenty of time for the mobile messaging apps to respond by offering a broader range of social features.

There are already clues to the future – provided by users. The continuing use of email on mobile (trillions of messages in 2013) indicates that  users are not entirely catered for by the chat-centric conversational UI. The growth of Vine and Snapchat (single-feature based as they are) indicate not all media-sharing needs are catered for by these apps. There is a lot still to play for.

If we look five years out, it is likely that the iOS and Android core will support a far more integrated set of messaging tools that cater for many of the needs we use single-use apps for today.

Message saving for private use, shared messaging to individuals or groups, media sharing, video and voice messaging (both synchronous and asynchronous), Timelines to look back and recall what we did in the past. These will all be features of the operating system.

The Future Is Being Fought Over Now

In that sense the current product focus – decisions about what features to separate into single apps, and how to integrate those into a unified UI all represent the first moves in defining who wins.

Facebook has Messenger, Camera, Pages and its primary app with Home as an integration point.

Google has Talk, Contacts, Mail, Plus, Hangouts perhaps with Now as a point of integration.

Apple is a little behind but has iMessage, FaceTime, Photostream, Mail and Contacts. iOS itself may be the point of integration.

WhatsApp, LINE, KakaoTalk, WeChat and the others will need to move beyond the chat-centric user interface into a broader set of asynchronous messaging features, and a new set of social features, probably with Timeline support, in order to stay ahead of the curve.

The End Of Social Networks And The Start Of A New Era?

The ground has been set for a fascinating next few years as the web-based social platforms seek to own mobile-social messaging and the mobile messaging apps seek to extend into more fully integrated social features.

As of this moment the mobile-first apps have the lead measured by number of users and levels of engagement. To keep it they will need to continue to innovate.

The human race is already social, and the smartphone has everything needed to enable them to act on their social needs. As the growth of OTT messaging and media sharing shows, a user’s social needs are being met with no need for a social network.

In this mobile-social world the only question is, whose software will we all use to enable human social activities? That is what this week was all about.