Parents of preschoolers can finally let go of “iPad guilt” – the term that refers to that terrible feeling you get when you use the iPad as babysitter. Today, a company called Kidaptive is launching one of the most comprehensive feedback systems for parents to date, allowing them to get a hand of their child’s learning and development by simply handing over the iPad and letting their child play.

It’s a shame that despite the wide variety of educational apps out there, too many parents still treat the iPad as a toy, letting kids rot their minds with time-wasting games and goofs, instead of using screen time to learn. But as any kid will tell you, learning is just sooooo boring. That’s why Kidaptive has so much promise – it merges the lean-back experience of watching TV with mini games kids actually think are fun.

The company first launched its “edu-tainment” iPad application called “Leo’s Pad” back in fall 2012. The app was designed by a team that includes CEO P.J. Gunsagar, who also co-founded and served as president of Prana Studios, a 3D visual effects studio with 1,000 employees in L.A. and Mumbai, India; “Chief Learning Officer” Dylan Arena, whose background is in cognitive science, philosophy and statistics, with multiple degrees in all three from Stanford; and Creative Director Dan Danko, who has written for a number of children’s TV shows including “Rugrats,” “Fresh Beat Band,” and PBS’ “Word World.” The combination of skill sets has paid off. The resulting creation has been a huge hit (well, in our household at least), as well as with over 350,000 parents who have downloaded Leo’s Pad for their children.

Leo’s Pad features the adventures of a young Leonardo da Vinci, his pet dragon, and friends Galileo and Marie, and has children doing puzzles (to build telescopes and rocket ships, e.g.), flying through clouds, identifying colors and shapes, drawing, finding letters in the stars, and much more. The games appear amid high-quality animation that rivals what you would find on TV. Even better, kids don’t seem to realize that they’re learning as they play – as far as they know, they’re just having fun.

Speaking as a parent myself, that’s a combination that’s tougher to find than you might think.

But the iPad babysitter scenario often means that parents don’t know exactly what a child is learning or where they stand. Today, Kidaptive changes that with the debut of what it’s calling “Parent’s Pad,” an in-app, parents-only area that shows their child’s progress in reading comprehension and math skills, as well as in cognitive, emotional and social functions, meaning things like “being patient” or “taking turns,” for example. In Parent’s Pad, you can see what “appisodes” (as these TV-like apps and games are called) the child has started watching, and what activities they’ve performed so far.

“We took our curriculum framework which is comprehensive – that is to say, it covers everything a child needs to be ready for kindergarten and prepared for learning – and it’s a hierarchy,” explains Arena. “The structure of the curriculum is that there are high-level categories, and there are children of those categories, all the way down to the dimensions we actually measure,” he says. These learning dimensions are explained and measured in the Parent’s Pad section.

Today Leo’s Pad has released three of these appisodes that it can measure, but the long-term plan is to release 25 appisodes in total, creating a year’s worth of curriculum with over 80 dimensions of learning. The plan is to have at least 10 more appisodes out this year, with all 25 completed by 2014.

The goal is to not only inform parents of a child’s progress using an easy-to-read, color-coded framework detailing their activities, but also to offer suggestions and tips as to how to help a child in an area where they’re struggling. 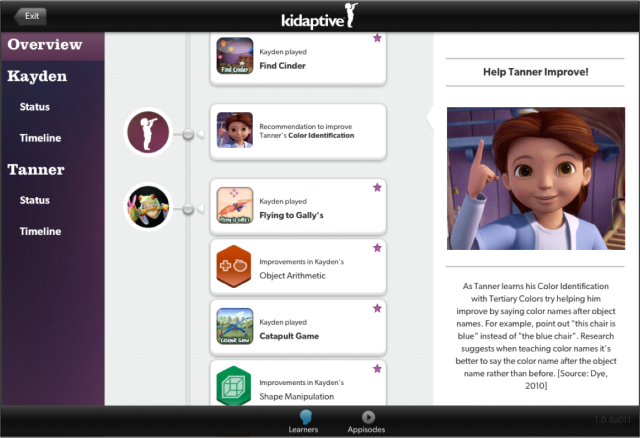 For instance, the app might offer a tip to parents whose child doesn’t yet know his or her colors, to begin referring to colors in a specific way when speaking. (e.g. “the chair is blue” instead of “the blue chair,” which research has shown to help a child acquiring color words.)

Longer term, the company might start offering “offline” activities – like a telescope you assemble in real life to accompany the one the child puts together in the app – as an additional revenue stream.

As the child plays the Leo’s Pad apps for longer, their profile becomes more filled out in Kidaptive’s assessment framework, and eventually that sort of thing could be shared with teachers upon the child entering the classroom. Over time, the same framework could be adapted to work with other apps – like those focused on older kids. Kidaptive isn’t the first company to think of how parents can track a child’s progress in apps. Fingerprint’s “mom-comm” system lets parent and child communicate upon the completion of levels or other achievements in its own “edu-tainment” suite of apps, and other apps like iLearnWith, Stickery, and many more, do something similar.

However, Kidaptive is the most comprehensive system, based on curriculum, which we’ve come across to date. For that reason, it’s enough to assuage a parent’s “iPad guilt”…well, as least temporarily. At some point, you’ll still want to yank that thing from their hands and shout “go play outside.”

But at least the child will have learned something in the meantime.