Woot, the daily deals site that Amazon bought in 2010 for $110 million, built a reputation for its “pile ’em high, sell ’em cheap” business model for shifting goods. Now, the company is facing up to a shift of a different kind: that of its own talent. In the last week, TechCrunch has learned that six key employees are parting ways with the company.

They include Darold Rydl, who had been president of the company and one of its very first employees; CTO Luke Duff, who has been the technical lead for all things Woot since 2005; CFO Rene Gonzalez; Dave Rutledge, who had been the creative lead on all of Woot’s editorial content as president of Woot Workshop; and Jay Johnson, leading both the deals and affiliate marketing divisions at the company as director of deals.woot. Rydl and Gonzalez have already left, and the other three have given notice but will be with the company for another week. Update: after publishing, we found out about another departure: lead developer Shawn Miller is also leaving, with his last day May 17.

This comes 11 months after founder and CEO Matt Rutledge (brother of Dave) also left the company.

No, these six are not banding together for a new startup. Rydl distributed a note to staff and then later posted it on Facebook (we copy it below) describing a desire for a change of scene, and we understand that each is doing his own thing.

(We have reached out to Amazon for a response to this story.)

But we have also been hearing another story about what’s going on at Woot that may have spurred some of these departures, simmering issues with Amazon management that have finally started to boil over. “I don’t think any of us ever envisioned leaving Woot,” one person told me. “I thought I would stay there and grow with the company as the industry changed. But there were a lot of frustrations.”

These, we understand, are connected to a gradual set of changes at the company over the years as it has bedded down at Amazon. “Amazon wanted to come in and do things in a different way, not considering the importance of the other stuff,” I was told.

It seems like one of the thorny points is Woot’s CEO, Garth Mader, who had been put in place by Amazon to work under Matt Rutledge, and was promoted after Rutledge left.

In short order, changes pushed through by Mader have spread to various aspects of Woot’s business.

The site, founded in 2004 by Matt Rutledge when it was first incubated inside Rutledge’s preexisting company Synapse Micro, was one of the pioneers of the “daily deal” model of selling goods online. It did so in an irreverent way aimed at disrupting the relationship between buyer and seller by making it far less formal. The original concept was to sell one “crap” item at a time that was at the end of its line (consumer electronics was a mainstay) at a competition-busting price, and then to launch another product at midnight each day.

Breaking up the pattern of single items for sale until they sold out, once a month Woot also sold a “Bag of Crap,” a group of items for a single price. Frank and funny commentary ran through all of this, along with an attempt to remain transparent with consumers through forums and details about how much of an item was sold.

All this brought a cadre of loyal users to the site — some 5 million per month at its peak, according to Rydl’s letter — rushing to buy things that, in a sense, no one else wanted to buy. Turning straw into gold, as Rydl describes it in his letter below.

Today, things have changed. Woot no longer shares data on how much of a product has sold. If you think about it, that kind of transparency also runs counter to how Amazon is about its own sales numbers for specific products. 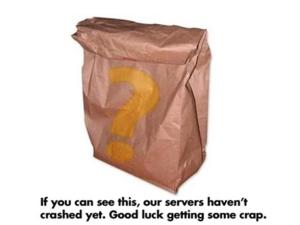 Meanwhile, the Bag of Crap stopped getting sold monthly, because it was deemed to be too much of a strain on the system, and the server crashed every time it was sold. “That wasn’t an acceptable customer experience,” the source says Woot was told. “But there were a million people trying to get 1,500 items, of course they would crash.” It didn’t make sense to scale up the hardware to support something we did once per month, he said. The workaround was that the company ended up creating a scavenger hunt to find a (less frequently offered) Bag of Crap, but given that users had to “like” Woot on Facebook to get the first clue, “the perception for many was that it simply went away.”

Another change was more backend but crucial to Woot’s business model. The company made a “big push” to ship products using Amazon’s fulfillment system but this proved inefficient and far less profitable for the kinds of products that Woot sold. The Woot method involved a big palette with the item able to be taken and thrown into a shipping box; the Amazon method was less simple, if perhaps more professional.

“The end result was that our variable costs quadrupled. We used to be able to sell 50,000-100,000 items per day at a lower price point, but now we can’t profitably sell items under $10 because the variable cost for shipping got too high.” It’s unclear whether at some point Woot will revert to what it had been doing in the past.

However, there is more possible pain to come in this area, with wider ramifications. Along with the push to move product into fulfillment by Amazon, Woot scaled down its warehouse operations but has never communicated to the operations staff what the plan is for them. Our source says that “has left the remaining operations staff with an uncertain future and has had a dramatic effect on morale as others across the company wonder if their group will also be shuttered as more Amazon services are used. The fear is that soon, all Woot employees will be asked to move to Seattle [from its current HQ in Carrollton, TX, north of Dallas] or they will be replaced by Amazon services.”

The bigger picture for daily deals

To be fair, there have been other pressures on Woot’s business that have less connection to Amazon’s ownership. Daily deals, as we have seen with Groupon and Living Social, have become less fashionable, partly because of an oversupply of companies working in this space.

“The fact that so many retailers started doing these kinds of promotions and started pushing so many emails I think led to fatigue,” our source says. Woot resisted emails, until two years ago, but “even then a small percentage came from there. Most still came from direct traffic, from people hitting the site every day to be engaged with the content.”

That direct traffic on the site, nevertheless, is down nearly 30 percent year on year, and is continuing to decline.

But ironically, because Woot is selling significantly more items now than it did in the past, this hasn’t impacted business. In fact, Woot’s revenues have been growing at a 20 percent rate over the last two years, and 2013 appears to be shaping up in the same range. Specifically, through Woot Plus, its flash-sales section, the site now offers more than 400 SKUs every day instead of six a year ago.

(Amazon does not break out how individual businesses are performing in its earnings statements.)

The story of how Woot was acquired and subsumed into Amazon can be a cautionary tale for other startups. Our source says that Woot had envisioned it would follow in the path of Zappos, the shoe and fashion e-commerce site that was acquired the year before Woot for $1.2 billion. Into that sale was built the idea that Amazon would stay hands-off. At the time of the acquisition, Zappos CEO Tony Hseih noted in a letter to employees:

“We plan to continue to run Zappos the way we have always run Zappos — continuing to do what we believe is best for our brand, our culture, and our business. From a practical point of view, it will be as if we are switching out our current shareholders and board of directors for a new one, even though the technical legal structure may be different.”

Indeed, while some of Amazon’s acquisitions still do get to do things their own way, more or less, there are others that have been held to more integration.

This is, of course, to be expected: Amazon’s wafer-thin-margin business model is predicated on economies of scale, so it doesn’t make much sense to run different organizations within it in ways contrary to that.

“Maybe because we were only a $110 million transaction, we didn’t have as much leeway in how things worked out for us,” our source said. But that brings a mixed fate: “The core reason we’re all leaving Woot is because we’ve lost the ability to do what’s best for our brand and culture. The business will no doubt continue to grow because Woot can leverage Amazon systems, but Woot will look more and more like Amazon until it is unrecognizable.”

“In the summer of 2003, a little group of three started kicking around ideas, hoping to let a little wholesale company [to] move a ton of crap. None of us believed the guy in a DeLorean who stood out front yelling “THIS IS WHERE IT ALL BEGINS, YOU GUYS!!!” In retrospect, we probably shouldn’t have called the cops on him. Our bad, guy.

But anyway, that little project soon garnered international acclaim and earned the love and adoration of millions of fanatical customers, all of them begging us for the crap no one else wanted. Every day, I felt fortunate to be around the sort of people who could turn straw into gold.

But today, after lots of soul searching, I’ve decided to take up new challenges. Tomorrow I leave Woot to embark in a new direction. No destination is clear, no course is plotted, but I remember the excitement of starting something from scratch, and I can’t ignore the urge to go create something new.

With my parting words, I want to make it clear: each of you should be proud of your contribution to Woot.com. With the simplest business idea ever (and no advertising dollars to spend) we attracted over 5 million customers, managed well over a billion dollars in sales, and spawned an entirely new industry.. from SCRATCH. We grew from a team of 15 to over 200 people in multiple states, and we even earned the attention of the biggest internet company in the world, a company that decided that it would be safer to flat out buy us instead of trying to compete. Few people in this world have accomplished what we did – always remember to reflect on these wins and celebrate them. In the world of retail, you guys are the freakin’ Justice League.

Please know that I am so incredibly proud of each of you and what we’ve all accomplished together. And understand I didn’t arrive at this decision easily. Nevertheless, I know my decision is right. I leave you all in the capable hands of my hand-picked leadership team – I am 100% certain that they are ready to take the lead. Although you may miss me with your hearts, day-to-day you’ll never feel a thing. And please, keep any tears off the product in the interest of optimizing the customer experience.

More seriously, I still consider my time at Woot to be one of the best things I’ve done, and I’m proud to have worked with all of you over the years. My love for Woot runs deep and eternal. Keep doing great things. After all, you’ve done so many already…..what’s one more?