Whom do the idols idolize?

Lei Jun, the CEO of Android handset and OS maker Xiaomi, is arguably the face of tech entrepreneurship in China as a long-time angel investor and serial entrepreneur behind companies like Amazon-acquired Joyo.cn and the recently IPO’d YY.

He’s been called the “Steve Jobs of China” in the sense that Xiaomi is an integrated hardware and software maker that has altered Android for Chinese tastes. They sell high-end Android phones at or slightly above the cost of materials and profit through accessories and eventually, software and services. While the country has been known for lower-end hardware makers, Xiaomi is pushing the idea that world-class products can be both made and designed in China.

The company has its own fanboys to prove it. Just two years after launching their first device, Xiaomi plans to sell 15 million devices this year, bringing the company $4.5 billion in revenue. Last year, they sold 7 million phones. Sales in batches of 200K to 300K phones on their website regularly sell out — sometimes in less than an hour. 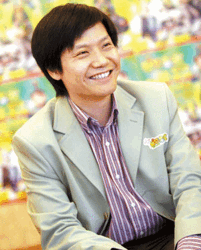 But Xiaomi also has incredibly high expectations to realize; the company’s valuation is not just predicated on raw hardware sales, but also on the idea that Xiaomi will eventually be able to monetize software services — something it has yet to prove against giants like Alibaba and Tencent in the ridiculously competitive Chinese market.

While founding the company three years ago, Jun thought about the history of Chinese business and entrepreneurship to find role models.

“What kind of company in China can last for a century?” he asked at the GMIC conference in Beijing this week.

He said Tongrentang’s mission taught him two things — never produce lower-quality products for the sake of cost and never spare any effort in creating the best quality products.

Hai Di Lao, which is indeed a delicious hot pot chain (yes, I’ve tried it), taught him about the value of customer service. In a separate interview, co-founder and president Lin Bin suggested that I order items not on the menu or even praise the dishware in the restaurant.

“They take customer feedback very, very seriously and always leave you with a surprise,” Bin said.

In a way, Jun is critical of the prevailing business culture in China. “There’s a big problem with integrity in China,” he said. “People sell pigs but you’re not eating pork,” he added on-stage, alluding to recent health scares where rat meat has been marked as lamb.

Appealing to a Fanbase

Paired with this focus on high-quality parts is a marketing model that’s unusual for any handset maker globally.

Xiaomi sold 72 percent of its phones directly through its online store last year, bypassing the costly logistical headache of dealing with brick-and-mortar retailers. Right now, they have two models: one that retails for 1999 renminbi ($326) and a more basic version that goes for 1499 renminbi ($245).

They can do this because the company has cultivated a unique participatory model of designing phones. Every week, the company releases a new version of its customized Android experience: the miUI.

Of their millions of customers, there are a few hundred thousand “hardcore” fans who do the teardowns, scrutinize every spec and offer suggestions on how to change the phone.

“Chinese consumers are actually very critical in the sense that they compare not just the build and look and feel of phones, but also everything that goes inside — the CPU, memory, speed, the specs,” Bin said. “They are pretty savvy about the money they pay for these phones.”

Jun uses Weibo, the public Chinese social networking platform that sometimes draws comparisons to Twitter, to solicit advice and communicate with Xiaomi fans. He’s offered different levels of hard drive storage based on user feedback. He said they even added a sound recording app at the behest of a reporter.

“We co-develop the phone,” Jun said in another interview. “I’ve used more than 70 phones in the last couple years. I have lots of suggestions, but will they change their phone? Even Nokia? Most likely not. So I created a model where I’ve invited all of my fans to be involved in designing the phone. It’s one of the most exciting things for them.”

He says this is a key part of why Xiaomi spends less than its peers on marketing.

Their approach ties into a big trend that is fueling a hardware Renaissance globally: the ability to feel out product-market fit through social media before a capital-intensive manufacturing process — be it through Twitter, Weibo or a Kickstarter campaign.

Through that feedback and Xiaomi’s own in-house engineers and designers, miUI includes improvements over the standard flavor of Android. Jun says that they’ve tweaked how applications run in the background so that a Xiaomi phone can go up to six or seven days without a recharge. (I’ve been carrying an older Xiaomi around and it has held up for a few days at a time, unlike my iPhone, which needs to be recharged every day.) There are also lots of UI flourishes that are, frankly, Apple-like.

Software For Profit And As A Protective Moat

While Xiaomi has done well at positioning itself as much more than a commodity hardware maker, one of its next challenges will be to prove that it can make money off software and services. Because it sells phones at or near the cost of the build of materials, Xiaomi will rely on accessories and services to boost its margins.

Jun is reluctant to say whether Xiaomi is at heart more of a software or hardware company (a question that has also perplexed analysts of Apple).

“We positioned ourselves as triathlon athletes,” Jun said. “We do software, hardware and Internet services, so if you would ask which part of the three is stronger, my answer is: would you ask a triathlon athlete whether they are best at running, swimming or cycling?”

They’ve shared some vanity stats showing traction, although it’s hard to understand what they mean. Xiaomi’s app store sees 3.5 million app downloads a day, 3.5 million photos uploaded to its cloud service a day and has seen 2 billion messages uploaded cumulatively. Its messaging app MiTalk is way behind Tencent’s WeChat, which is the other big China tech story of the year with 190 million active users.

There are some promising metrics, though. Bin says Xiaomi’s customers are twice as active on the mobile web as those of other manufacturers. That sort of engagement could lend itself to interesting revenue opportunities down the line in gaming and e-commerce, although the company declined to share specifics.

There are unique challenges. For one, these markets rely on more of the subsidized model that’s common in the West where carriers lower the list price through post-paid plans. In China, many consumers pay for the full cost of the phone upfront. They also don’t know whether the marketing model where they heavily engage a core set of fans will work outside of mainland China.

The other growth area is with Xiaomi’s new set-top boxes.  It was a rocky start with the initial sales of the set-top boxes blocked by Chinese regulations around TV content. But they re-launched two months ago. Bin and Jun declined to share figures on sales so far, except to say that Jun has seen second-hand models show up on eBay and Taobao for $90 (which is about twice the list price of 299 renminbi).

Bin is hesitant to share too many targets, because he claims that Xiaomi doesn’t really even have that many internally. Even the goal to get to 15 million handsets is to produce that many, not necessarily to sell that many (although they invariably sell out).

“We don’t have any KPIs (key performance indicators) — not even internally,” Bin said. “Our KPI is to get handsets to everyone who can place an order online and make a full payment.”