Today is just jam-packed full of acquisition-shutdowns. Just hours ago, word broke that Yahoo! had acquired both MileWise and GoPollGo, with plans to discontinue both. Next up on the happy-now-sad-users-later train: Clipboard, the bookmarklet-based web clipping service we covered previously here.

According to a notice e-mailed to its users, Clipboard has been acquired by Salesforce and will be shutdown in a bit over a month.

[Disclosure: Clipboard was backed by CrunchFund, the venture capital firm headed by TC founder Michael Arrington. While Mike — nor anyone else involved with CrunchFund — has ever even mentioned Clipboard to me in passing, we try to be transparent about these things.]

While terms of the deal weren’t disclosed, we’re hearing that the final figure was in the “double digit millions” — UPDATE: We’re now hearing from a very, very solid source that the purchase price was $12 Million. Leading up to today, the company had raised $2.5M from Andreessen Horowitz, Index Ventures, CrunchFund, SV Angel, Betaworks, DFJ, First Round and others.

Wondering what the heck Clipboard is — or, soon, was? Not unlike Pinterest, Snip.it, or the myriad other web clipping services that popped up around 2010/2011, Clipboard let you highlight things from around the web and “clip” them into a digital storage locker for later perusal. Once in their backend, clipped content could be annotated, shared, or just browsed at a later date. Given the similarities to existing services like Pinterest and Evernote, both with huge traction themselves, Clipboard had yet to find a substantially sized audience for its service.

Prior to the acquisition, the company had grown to around 100,000 users, and was seeing growth rates of 40 percent month-over-month. In January, it reported having reached 1.7 million+ clips since it had opened its private beta, back in October 2011.

The company had some interest in the education space, however. At the beginning of the year, it received a strategic investment from ed-tech company Scientia. But following the Salesforce buyout, the product itself will be shut down and discontinued on June 30th, 2013, so those earlier plans to further develop the product for use in the education space will be discontinued as well.

While the notice itself makes no mention of what’s next for the team, an acquisition FAQ on their site lays it all out: Clipboard founder and CEO Gary Flake will be joining Salesforce as VP of Engineering, and much of the service’s design and engineering team will still be working under his guidance out of Salesforce’s Seattle office.

Clipboard is giving users until the end of June to say goodbye to the service and get their data out through a provided export tool. Come June 30th, that data heads for a server farm in the sky (read: it’s getting destroyed). 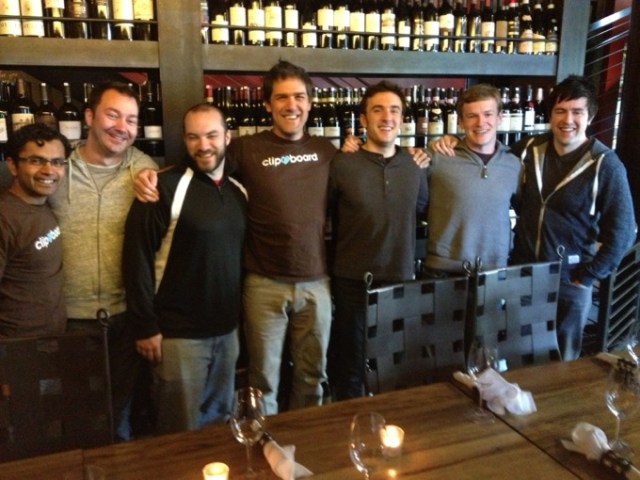 The full text of the e-mail:

We have some bittersweet news. We are extremely happy to announce that salesforce.com has signed an agreement to acquire Clipboard, allowing us to pursue our mission of saving and sharing the Web on a much larger scale. But at the same time we’re also sad to see this stage of our adventure come to an end, especially since it means that our relationship with you, our users, will irreversibly change. The Clipboard service at clipboard.com will be discontinued on June 30, 2013.

But we have your backs. If you want it, all of your data will be preserved into a personal archive from which you can view your clips and boards offline. And if you want your clips destroyed, we can handle that as well. All of the details for what comes next are in the FAQ and some more personal reflections are on our blog.

In nearly two years, 140,000 of you created nearly 3 million clips while over a million of you interacted with them. Thank you for joining us on this journey. We will dearly miss seeing all of you on Clipboard, but we hope you’ll support us in the next leg of our journey.