Back in 2010, Google launched Instant Preview to provide users with a quick way to get a graphic preview of a webpage before you click on the actual link. Now, as first spotted by Alex Chitu from the Google Operating System blog, it looks like Google is thinking about removing this feature and replacing it with a new drop-down menu.

Update: a Google spokesperson just responded to our inquiry: “We’re constantly making changes to the layout and features of the search results page.” The wording of this response sure makes it sound as if this will be a permanent change and isn’t just an experiment. Google’s typical answer to these questions starts with “we’re always experimenting with [xyz],” after all.

Instant Preview is probably not a huge hit, given that Google wouldn’t consider removing it if it were a popular feature. It did hide a bit of useful functionality besides the previews, however. Opening these Instant Previews allowed you to also find similar pages and access the Google+ Share feature. In addition, it was also the only way to find Google’s cached version of a given page, too.

All of these features are still there in this new version, but they are now accessible through a drop-down menu right next to the main link.

It’s not clear if this is just a test, or if Google is indeed fully removing this feature and replacing it with the new drop-down menu. We have contacted Google about this change and will update this post once we learn more.

Here is what this looks like for TechCrunch (“Similar,” for some reason, only appears for a subset of results): 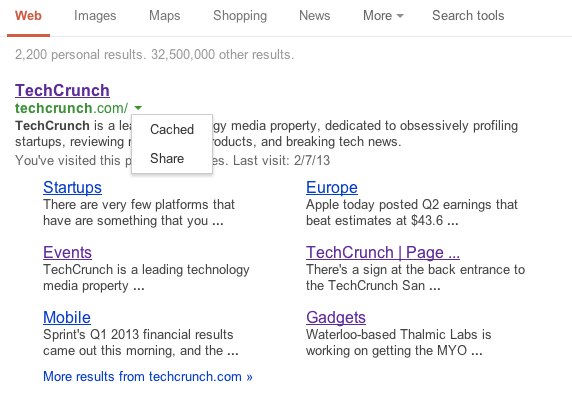