Just when you thought chat app makers had run out of things to say — i.e. because they’ve said it all already, via text, VoIP, videochatting, emoticons, snaps, pokes, stickers, Chat Heads, WHATEVER — along comes London-based app studio Ustwo to pour its distinctive brand of fun-loving mischief into the category.

After launching Rando last month, a random photo-sharing app which sparked plenty of confusion/curiosity over its lack of social sharing features (curiosity appears to be winning, with more than a million randos since shared), Ustwo has turned its attention to two-way communication and unboxed Honk!: a messaging app for iOS and Android.

Ustwo brands Honk! as a “super chat” app. What’s a super chat app exactly? “We had felt that none of the [messaging competitors] had that spark.. they felt too ‘message/// not enough SUPER CHAT,” (un)explains Ustwo co-founder Matt Miller via email. Clearly a man with a very visual mind. On its blog, Ustwo adds that it was “playing with the concept of non-verbal communication”  — photo-sharing being the monster truck driving most digital social interaction these days — and wanted to build a messaging app that wasn’t so “streamlined” and focused on text, but rather all about imagery and playful self-expression.

To my eye, Honk is the sort of app you could imagine a DrawSomething-addicted lolcat cooking up after a particularly heavy fish-supper. Its splendid tagline says it all: “If you have nothing better to do or say. Honk!” 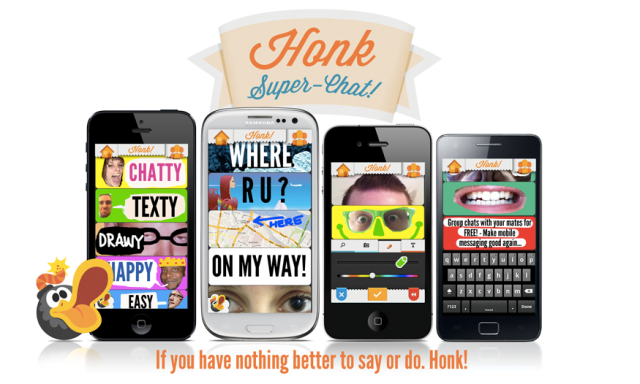 The app encourages users to treat messaging each other as a game — furnishing folk with the tools (camera, pen, colour palette, fonts, Flickr Creative Commons photo search) to cook up a heady cocktail of visual banter with which to amuse/terrify/meme-ify their friends. Messages are segmented into portions that are filled up individually — to create the overall messy messaging patchwork that is a Honk!

The segments look likely to encourage people to create composites of their friends’ faces. And turn running jokes into visual memes. It’s part messaging app, part game. Or as Ustwo puts it: “an alternative way to communicate with friends, show them what you’re up to and exchange nonsensical but engaging messages with them”. 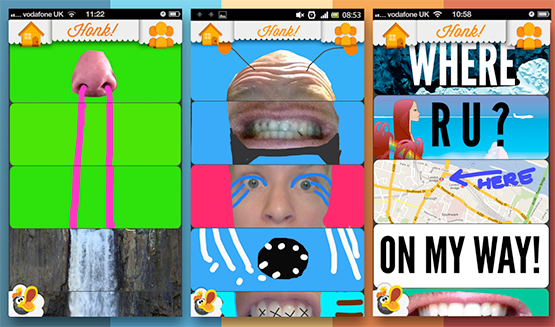