The growth in smartphone usage — supported by ever-faster mobile network speeds — is also giving rise to a much more competitive landscape among carriers, handset makers and other phone retailers targeting consumers on the hunt for new devices. Google today is releasing a report it compiled in partnership with Compete to show how that is playing out in one market in particular, the U.S. It shows that while carriers may still hold the key to making a call or getting online with a smartphone, when it comes to buying one, carriers are taking a backseat as users seek out brands and best prices first, with carriers as the follow-up to that.

Here is the graphic from Google’s report that spells out how the retail landscape is changing: 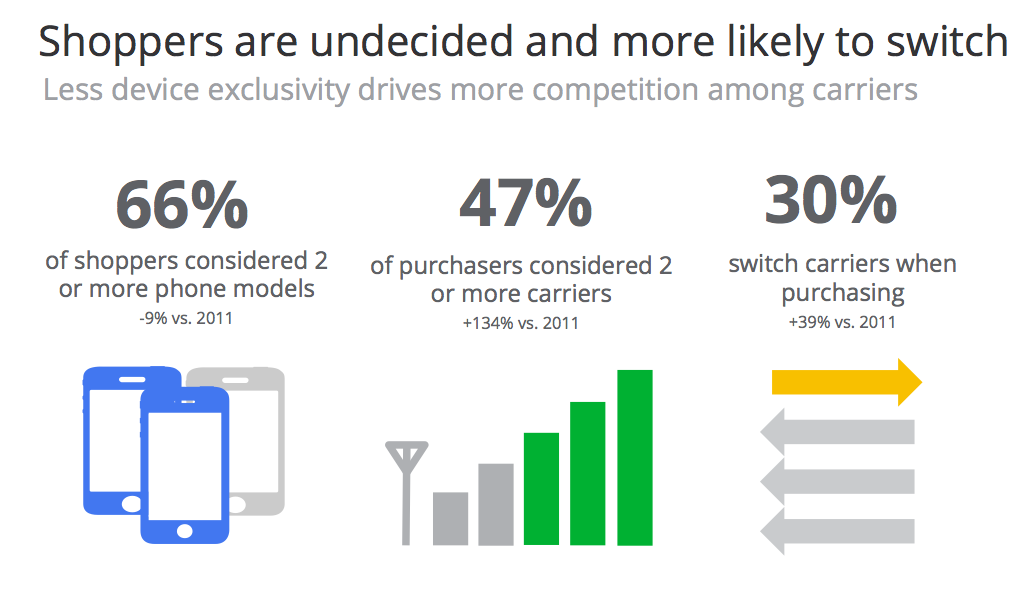 Google notes that while we are still seeing some competition among handsets, it’s on the decline. Some 66% of users surveyed in March 2013 noted that they considered 2 or more handsets when buying their last device in the past year. That number, however, is down by 9% over 2011.

This speaks to the continuing consolidation we’re seeing in overall smartphone rankings, where brands like Samsung and Apple increasingly dominate in sales, to the detriment of companies like Nokia, HTC, RIM and others. (These figures out earlier this month from Kantar Worldpanel put iOS and Android sales at nearly 93% of all smartphone sales in the U.S. in the last three months, with Samsung very much the biggest of the Android OEMs.)

But look over to the next graphic and you can see quite the opposite trend. When it comes to considering carriers, some 47% of users are these days considering more than one, with that number up by 134%: in other words, carriers are gradually losing their brand grip. And I’d hazard to guess that carriers come into the equation with a heavy price rider: with those offering the best deals getting more attention if a user isn’t locked into a plan elsewhere. That’s further demonstrated by the fact that these days, 30% of consumers switch carriers when they’re upgrading, a rise of 39%.

Although a lot of people made a big deal about users switching to Verizon when it finally started to carry the iPhone in 2011, after years of exclusivity on AT&T’s (less good quality, they argued) network, the Google/Compete numbers seem to tell a slightly different story: It found that one-third of buyers select phones first, and carriers second, with 25% of those purchasing devices in the last year doing so because they wanted the “latest and greatest.” So much for network quality. Meanwhile, upgrade eligibility, which ties users in to signing with the same carrier, only motivated 9% of purchases.

Indeed, there are other signs that many of the stronger controls by carriers are on the wane. T-Mobile’s big marketing push in the U.S. as the “Un-carrier” plays testament to that, as do services like Three in the UK, which lets users sign up to smartphone tariffs on rolling, monthly contracts. (Yes, you can argue as Darrell has that these are more marketing tactics, with the user getting billed one way or the other; but all the same tariffs that further decouple phone services from contracts are on the rise.)

Among its other findings — unsurprisingly highlighted by a company that makes the bulk of its revenues from digital advertising — Google said it found that 80% of all mobile phone shoppers research for their handsets online, although the majority (61%) of sales are still completed in physical stores, with another 4% on the phone. It also found that the trend for multi-screen content consumption is also being echoed in mobile device shopping habits: the number of those using mobile handsets and tablets to look up info about mobile phones has tripled; with one-third taking that browsing into stores themselves. That’s also seen a rise in video usage too, with those browsing for phones online including 30 minutes or more of video-watching as part of their research.

As with other kinds of technology, younger demographics are proving to be the least price sensitive: 62% of 18-34 year-olds spent over $100 on phone purchases last year, Google notes.