The overall landscape of mobile apps is an interesting one, with most of the top free titles on Apple’s App Store being games or services pushed by massive companies like Twitter (Vine) or Google (Maps). Is there a place for yet another service to pick up steam before a larger network like Facebook copies its functionality?

That’s the interesting future that lies ahead for Polar, the up-and-coming polling app for iOS, that is built for speedy interactions with either complete strangers or people you know. You can set up a poll in seconds, and you’ll start getting responses quickly, almost within seconds of submitting it. The company raised $1.2 million in February to build out its team and expand its functionality as quickly as possible. Two months later, it has released a new version that hopes to increase discoverability of polls, thus increasing interaction.

Polar founder Luke Wroblewski is obsessed with data and is willing to discuss most of what he’s learned since the launch of the app. Not only does this give you insight into what he’s helping to build, but it gives you an idea of the landscape that I mentioned above. Polar is quickly approaching 8 million total votes, which is pretty good for just having launched in November of last year.

I spent some time chatting with Wroblewski about what he’s doing with his funding, how Polar stacks up against competitors, how the community actually uses the app and the latest update for iOS: 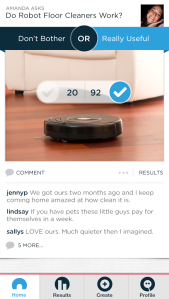 TC: Tell us about how you’ve been doing since we talked last. How has the funding been used thus far?

Luke Wroblewski: We launched Polar at the end of November and saw lots of growth and activity. So much that the two-man team of me and my co-founder couldn’t keep up. So in January we brought on some contracting help to get things stable. While that lets us get back to making product, it also introduced a lot more expenses. So in February we raised a round from a lot of great investors. That’s when we last caught up. Since then we used March to hire a full-time team to focus on building and designing the product. We now have five full-time folks on the team.

During that month we redesigned and rebuilt three out of the four major parts of the app and expanded our web presence. The new version of the app is out now and the web stuff is going to follow shortly. So we’ve been busy.

TC: How many polls are people creating?

Wroblewski: Today, over half the people that sign up to use Polar (53 percent) actually make a poll. When you consider the idea behind Polar is “everyone loves to give/hear opinions but the tools we have online to support that are abysmal,” then this stat is great.

We decided there’s got to be better way (than web-based surveys and forms) for people to ask each other what they think. And over half of our users have jumped in and collected opinions using our approach. I get excited by the 50 percent number because of the standard 1 percent, 10 percent, 100 percent rules you see on the web. That is 100 percent of people consume content, 10 percent curate it and 1 percent create it.

Bradley Horowitz (VP at Google+) popularized this back when we worked at Yahoo! together. Granted, in social networks these ratios are a bit different. BUT still 50+ percent is really good when you consider we explicitly tried to make poll creation as fast and easy as possible. So lots of people could collect opinions.

The other compelling stat is 11.1 polls made/poll creator. Even when you take away the extremes (people that make lots of polls), many people are repeat poll makers. So a high percentage of people are making polls, and usually making several poll as well.

“Mobile is the new entertainment screen.” 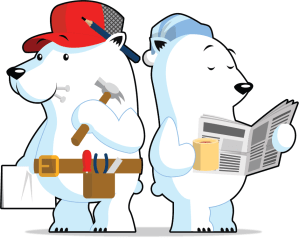 TC: How many votes have been registered on Polar?

Wroblewski: In late December, TechCrunch published that we’d hit 1 million votes. At the start of April, we’re approaching 8 million. Which is good but what’s more interesting is that we did a lot of work to get people to more relevant questions and, knowingly, took a hit on total votes.

In our first two months after launch, we saw an average of 55 votes per user per day. We feel really good about that result. To put it into comparison, I recently came across data from the popular voting app Thumb. Their users provide an average of six “thumbs” (votes) per day.

But the total number of opinions people share on Polar isn’t the only thing we keep an eye on. We focus a lot on getting people to topics and other people that interest them. After all, it’s much better to share opinions with people and about things you actually care for/about. To make this possible, we actually made a number of changes to Polar in early February to show people more relevant questions vs. many questions. As you might expect this had a negative impact on voting. That is, we saw votes per user per day drop from 55 to 45. Still really high but lower than where we were before.

So people were seeing better (more relevant polls) but voting less. Which is great but ultimately votes drive a lot of the fun and positive feedback on Polar. So we wanted to have our cake and eat it, too. To do that, we began to provide more exposure to topics through tags and featured themes. Anywhere in the app, you see a tag, it only takes one tap to jump into a topic and you can start sharing opinions on a particular type of question or topic. Since we made this change, we moved the average number of votes per user per day back up from 45 to 50. 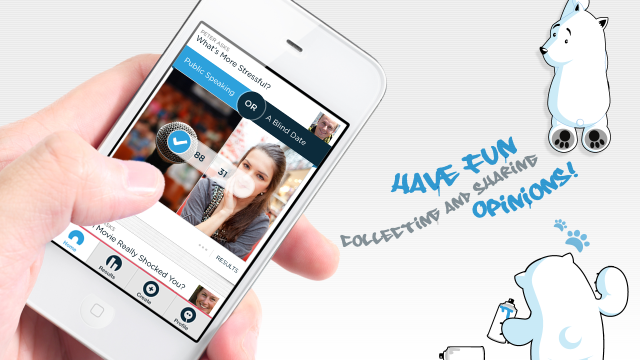 TC: What have you learned about your community? Any specific demographics that have gravitated towards Polar?

Wroblewski: We started out thinking we’d see a lot of decision-making questions. Like which shirt should I wear out? or What movie should I go see? And there is a good amount of those kinds of questions (just check out the #whichoutfit topic), but what we see a lot more of is people using Polar as a media experience. They talk about topics that interest them, water cooler news, and things they’re curious about. When you consider that 79 percent of mobile app time spent is “entertainment” it makes sense.

Mobile is the new entertainment screen. And in many case it is being used while other screens (like the TV) are on as well. So the shift from “decision-making” to a media experience is understandable. This is why we’ve really embraced the idea of topics on Polar and are getting set to release these topics as web pages very soon. That is places where you can go and share your opinions on things like TV shows, recent news, sports and much more.

TC: Tell us about the new version of the app and its features. Any specific reasons on how they came about?

Wroblewski: The new version of the app is really building on the two big themes I touched on: this media experience and relevance. We want to get people to things they’ll love (topics and people) and we want to do so with minimal (mobile-level) effort. So in the new version… 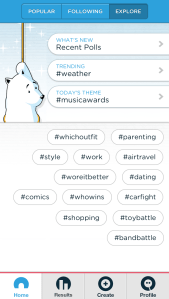 We introduced the ability to search for topics (tags) right in the new menu on the home screen. We previously had a separate Explore screen for browsing popular topics (and no search) but quickly learned it was too much effort for people to get this separate screen and parse it. So we took the best parts of the Explore experience and put it right inside the home menu: breaking topics, trending themes, and search. In the coming days we’ll actually personalize these topics per person, as well. We already personalize this menu in the new version. The Following link in the menu actually shows how (that you follow) posted new polls. So each time you open the menu you get a personalized view of what’s new. It’s a really nice small touch.

We redesigned the profile page to allow you to jump in and vote on someone’s polls. This list of polls can also be sorted by most popular, most commented, newest, oldest, etc. This allows you to get a quick (yet deep) sense of a person’s polls and personality, and, if you like, follow them easily. It’s another way we’re trying to make a more relevant experience — find people who interest you.

We created a new activity page that includes voting milestones (10, 50, 100 votes) and real-time vote updates for those who check-in often. Actually our Activity screen is the most popular screen in the app. But there’s so much voting coming in that we had to get creative about how to display activity. So we did the milestones that accrue when you are not on the app. And real-time voting updates that show only when you open the app or refresh the activity page. That way you can still keep up realtime with voting activity if you want. OR you can just check in on the milestones. We also added push notifications for these milestones and comments. You can even view comments separately from votes on the Activity screen. We learned people love the comments/conversations on Polar. So we gave them more visibility.

There’s lots more but these are the big pieces of the new release. 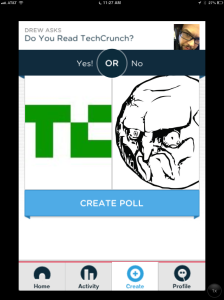 What you’ve seen with Polar is that even though there are already a ton of social applications, building a new interaction graph from the ground up is possible. Polls have been popular on the web for years, but nobody really nailed the experience on mobile until Polar came along. Other companies like Seesaw are having fun playing around with this concept, but it seems like Polar has edged them out on the “fun” aspect. The application itself is light and airy, well-designed, and gives you the immediate feedback and interaction that gets you to keep coming back.

As its user base grows out, it will be difficult for Polar to keep up with the requests of its users, so keeping an eye on the data, like Wroblewski does, is key to their success. In the age of hoarding ideas in the hopes of multi-million-dollar exits, it’s nice to see entrepreneurs openly discuss their vision, path and more importantly, their learnings along the way.

When it comes to making money, Wroblewski tells me that some brands are already testing out the platform, but they haven’t focused on setting up a paid model or toolset for them yet, with the delay due to wanting to “do it right.”