Hip online eyewear startup Warby Parker has, over the last two years, been partnering with boutiques to open “stores-within-stores,” or small Warby Parker showrooms, where customers could try on their eyeglasses in 3-D. These showrooms popped up in L.A., Nashville, San Francisco and many others. Today Warby Parker officially announced its first, flagship retail store in SoHo in New York City.

As e-commerce has matured, some of its younger companies have begun to turn to more traditional forms of advertising. One Kings Lane, Gilt Groupe, Beachmint, Fab and Wayfair are just a few of the boutique online brands to launch ad campaigns on TV in the last six months in an effort to drive viewers to mobile apps and sites.

Now, if Warby Parker is any indication, e-commerce companies may continue to expand their businesses by moving offline and building their own brick-and-mortar retail outlets. Amazon CEO Jeff Bezos has expressed interest before, while 9to5Google reports that Google is looking to open retail stores in time for the holidays. Warby Parker doesn’t quite have that kind of market cap, but clearly it wants to go head-to-head with the biggest offline retailers. 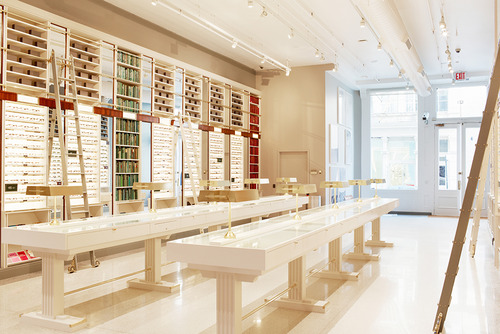 Interestingly, Warby Parker was founded in part because (at the time) less than 1 percent of eyewear was sold online, so the startup hoped to take on the bigs like Luxottica — which owns the seemingly ubiquitous LensCrafters, Ray-Ban, Sunglass Hut and Oakley, among others — by creating a strong, fashion-conscious brand and selling online at a lower price and better margins. It worked, and the startup made a name for itself, and started to catch the attention of consumers and investors.

Warby closed a $41.5 million investment at the end of February, led in part by J. Crew CEO Millard S. Drexler (who was formerly CEO of Gap and currently has an awesome name) and American Express, along with a host of VCs. With heavy backing from the retail world, and a growing number of showrooms, the company is now experimenting more aggressively with its offline push. But it’s trying to transfer the same academic aesthetic/brand offline while keeping a little bit of the tech, thanks to teaming up with analytics startup, Nomi.

Its new flagship store in NYC is designed to look like a classic, old library — the New York Public Library, really — with brass library lamps, rolling ladders and musty books. The whole deal. In a way, it feels a little pretentious, but it’s also awesome and makes sense given the product; you use your glasses to read, nerd — sometimes even things besides the Internet.

And in fact, it’s almost the opposite. Rather than keep its eyewear behind glass, the startup’s new store leaves its glasses out in the open to be taken for a test drive. The store also includes an in-house optometrist for on-hand, $50 eye exams offered seven days a week. Non-prescription glasses will be sold for take-away, and customers can choose to receive products by mail or to pick them up at the store. 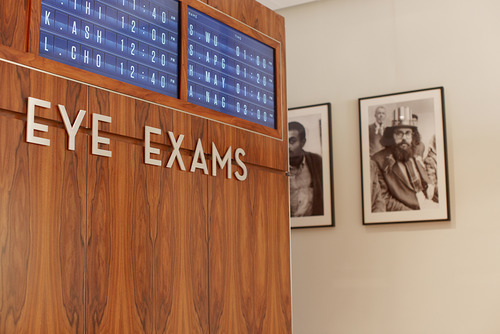 That might seem like superfluous information for those not living in the five boroughs, but it appears that the startup is already taking its brick-and-mortar retail strategy beyond NYC. As Boston Business Journal recently reported, Warby has listed a job posting for a “store leader” in Beantown, seeking someone with “sales management experience with a customer-focused, operationally excellent retailer … to build a team of exceptional team members.” And they’re also hiring an in-store optician. You don’t have to live at 221B Baker Street to put those pieces together, amirite?

But the other key to Warby Parker’s new offline strategy, as Om describes in his coverage today, is that the company wants to bring more tech into the offline world by wiring its stores to collect data. Using Wi-Fi, sensors, etc., it wants to get a better understanding of how people shop, what the trends are both in terms of in-store flow and customer design and product preferences, for example. The more they can bring smart data collection methods offline, the more business intelligence they can glean — especially when, as Om points out, it’s combined with insight from online shopping data.

It may be too early to say that the eyewear startup is at the tip of an online-to-offline retail wave about to sweep through e-commerce — not really sure I see that happening yet — but it is also far from being counterintuitive. Create a strong, hip brand online, generate brand recognition and revenue, get a foothold on the market, and then move offline. It seems like a familiar playbook, even if it isn’t.