Relay Foods, an online grocer which sources its foods from local vendors, has raised $8.25 million in new funding. The company says it will be working with Battery Ventures and TomorrowVentures to beging building out a mobile platform and expanding its team in the months ahead. The capital infusion was raised through a common stock-only sale, the company notes.

Founded in 2009, Charlottesville, Virginia-based RelayFoods.com has been operating an online food marketplace focused on providing sustainable and artisanal foods from nearby farmers and other vendors, as well as grocery items from a number of national brands. The company has found traction in the mid-Atlantic region of the U.S., and now plans to expand its market share in key metro regions, including Washington, D.C. and Baltimore, while also expanding into Williamsburg, Virginia. The goal is to eventually bring the service nationwide, but that’s further down the road. The near-term plan is to expand across all mid-Atlantic markets by mid-2014. The next major market it’s going after – North Carolina – will take place in 2014.

In addition, the company is now in the process of preparing to launch a mobile application and a redesign of its online marketplace, hiring on both the executive side and the developers along the way. There are now over 100 employees at Relay, so there are no large-scale hiring plans outside of D.C. and Baltimore, where the operational staff is being expanded. The company also recently hired a CFO.

But importantly, the new site and app will also now include more information about where the food it sells is being sourced, details on the producers themselves, as well as more nutritional information. Specifically, new features will include one-click recipes, an improved browsing experience, and vendor profiles.

On the operational side, the company is adding fifteen vehicles to its fleet and a commercial kitchen – expansions which the company says will enable it to add more pickup locations, develop an in-house prepared foods line, and expand its product selection from the local vendors. 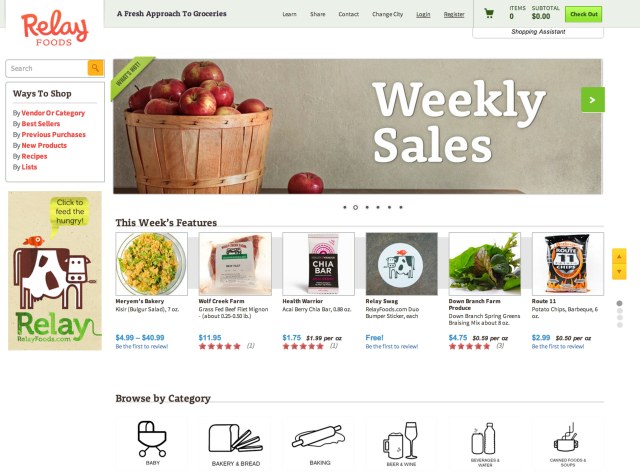 Today, Relay Foods operates both as e-commerce site where customers buy online then go to a pick-up location to grab their purchases, as well as a subscription-based home delivery service where customer can paid by month, months, or year choosing from a variety of plans.

The company didn’t disclose the source of the funding, referring to the group as “a mix of forward-thinking market, tech, and social impact investors and investment funds.” BatteryVentures and TomorrowVentures have Relay Foods in their portfolios, however.

The additional funding comes at a time when many startups are now newly interested in the local, online, and artisanal food space, including Gilt Taste, Farmigo, Love With Food, Delicious Karma, Good Eggs, and most recently, Fancy, to name a few.

Relay Foods has raised $14.25 million to date, $6 million in a previous Series A round, and $8.25 million in a Series B. The company has declined to discuss sales or revenue, but claims they’re growing “exponentially” with a goal to break even in the near-term.