Props are owed to companies like Blackboard and Moodle for being early movers in the educational software space, particularly in helping catalyze innovation in learning management systems (LMS). The problem is, of course, they got their start over a decade ago, and haven’t always elicited raving reviews from students and schools.

Blackboard has continued to expand its suite of tools, and the ever-growing-features of LMSes like Sakai, Edmodo, Desire2Learn and Schoology are finding bigger and bigger audiences. The Salt Lake City-based Instructure launched Canvas in 2011, hoping to one-up a crowded field of competitors and give colleges and universities a more “modern,” cloud-centric alternative.

Taking cues from Moodle, Instructure designed Canvas to be open source to let third-parties contribute to create more rapid development and bug fixes, while going one step further by avoiding Flash, offering a mobile product, APIs and scalable hosting. But, traditionally, the problem has been that EdTech has yet to become an ecosystem, CEO Josh Coates says, and integrations and APIs are few and far between.

Meanwhile, schools want to know what learning tools are out there, but they don’t want to do the work themselves. In response, Instructure is today announcing Canvas App Center — an app library built around its LMS that will allow teachers, administrators and students to install third-party apps in Canvas with one click that will be widely released in June. But what seems to have broader application is its independent open apps site, which is available now, offers over 100 apps, including WordPress, Khan Academy, Dropbox and Evernote, and allows users to install them on a slew of learning platforms and tools.

The apps are free to install, though some may require a subscription with the publisher or vendor, but Instructure won’t be brokering that relationship or taking a commission, Coates says. The App Center, in the familiar way of app stores, gives students and teachers a quick way to find, install, rate and review apps. For example, the App Center includes a recommendation algorithm that suggests apps based on user preference, the institution and their previous activity. 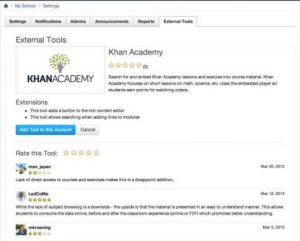 Today, more than five million teachers and students at over 350 institutions use Canvas as their LMS, which immediately provides scale to the App Center and gives those third-parties a new distribution system and potential audience. Instructure hopes to further incentivize customers by not taking commissions on App Center installs; the idea being that the less teachers and schools have to worry about pricing and cost, the less friction there is, the more installs.

Business-wise, it may not seem like the best strategy, but Coates says that Instructure is focused on building an educational platform — not a one-dimensional product, but a service that includes integrations, APIs, a community and an ecosystem. That’s why the company has made its open library LTI extensions available to the public — now any third-party can add apps to the open resource which should work in most learning management systems. 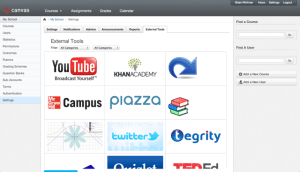 How many other educational software providers can say that? Not too many. Early on, Blackboard started developing Building Blocks to let third-parties customize Blackboard Learn and create extensions for its LMS. However, as Inside Higher Ed details at length, while Blackboard has had a long history with open source technology (to its credit), at the same time, its relationship with open source technology and competitors themselves — has been a tortured one.

For example, ask Desire2Learn — a now fast-growing competitor to both Instructure and Blackboard — about Blackboard and they’ll bristle at the mention. Back in 2006, Blackboard filed patent lawsuits against Desire2Learn, which threatened to hamstring the company before it got off its feet. Three years later, the patent claims were dismissed, but as Inside Higher Ed details, “following several months of intense criticism,” Blackboard was forced to issue a “patent pledge” in 2007, “promising not to sue Open Source projects for patent infringement.” So there’s that.

In terms of creating valuable open-source educational initiatives, InBloom is trying to do this for educational data, but they’re a non-profit, almost a consortium of public/private/startup interests. Not only is it unusual to see a for-profit company take the high road like this (a wink to Google), I think most would agree that it’s the right move for education — in that it helps the sytem take steps toward becoming an ecosystem. That is, if all parties involved in education could ever make a decision collectively, beyond “we need more money and teachers and maybe technology” or “you need to help my child.”

A great example: Here’s open educational data initiative InBloom. Here’s a description of people/parents not even being able to agree on InBloom. Yes, startups, someone in education will fight you and the medicine you’re trying to put down its throat. Smile and do it anyway.

“We want to tear down the walled garden that has plagued the LMS market,” Instructure co-founder and CPO Brian Whitmer said. “Third party integrations have existed, but they’ve required the IT
department to make them work. With Canvas App Center, we want to let anyone install an app with one click and begin personalizing their learning experience with these tools.”

I’m sure someone will find a reason to object, though. Because, hey, no good deed goes unpunished. Especially in education.

[Update: This post has been updated to give more backstory on Blackboard, particularly as it relates to open source.]