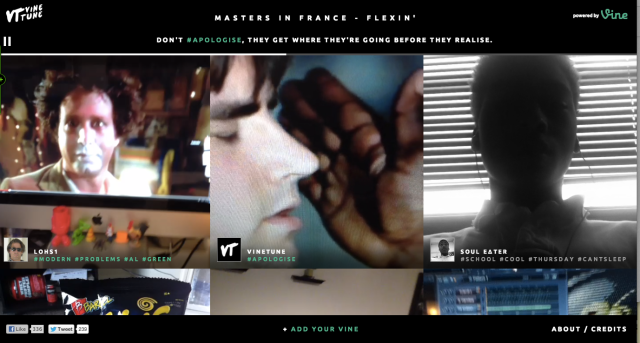 From the moment it launched under Twitter’s watchful wing, marketers and the media have considered Vine a new frontier for advertisers. User-generated content is all the rage in marketing, and social media is finally old enough for even traditional ad agencies to have it figured out. Vine combines all that with the familiarity of video advertising.

Yet three months later, we haven’t seen any revolutionary advertising on the platform, but rather tiny baby steps. The latest step is called VineTune (NSFW kind of), an experiment from some designers out of London ad agency Beattie McGuinness Bungay that crowdsources various vines from Twitter to create a collage-style music video based on the lyrics.

Each month, the VineTune team will select a relatively unknown music artist and create a music video for them with the VineTune system. The first song they chose is called Flexin, by Masters Of France, and it’s quite easy to bump along to. They then choose a certain word from each line of the lyrics, search for that word as a hashtag on Twitter alongside the Vine.co web address, and source vines for each line of the song.

This way, each time you visit the site, the music video is different since VineTune pulls the latest vine from each pre-selected hashtag.

Want to be a part of the magic? You can add a vine, too.

By clicking the “add a vine” button at the bottom, you’ll be sent to directions with a certain lyric and specific hashtag you should be inspired by. Mine was “#she got high.” From there, you create a vine and tag it with your assigned hashtag (in my case, it would be #she) and the hashtag #Vinetune. 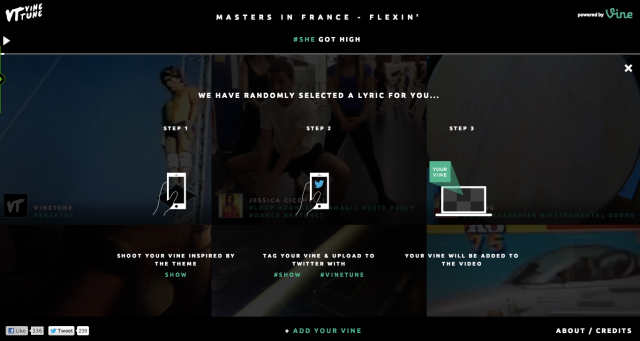 The next time you hit up VineTune, your individual vine should show up as part of the music video.

There are a number of great things about VineTune. Along with being fun and compelling content, it’s also a cool way for aspiring artists to market themselves, as well as create an innovative music video on the cheap.

But VineTune is also a glimpse into the minds of advertisers as they approach this new platform.

“As soon as you give people the tools, they will take part,” said the founders of VineTune. “Everyone wants to do the first real branded thing in Vine. We predict it will be a nonprofit.”

They explained to TechCrunch that charities are much more experimental with advertising, whereas bigger brands require an efficient, tested medium for their message.

The VineTune team also mentioned the Wolverine trailer that came out on Vine recently, explaining that we’ll see a real breadth of experiments on the platform before it’s truly “figured out.”

While some will take short content (like vines) and elongate them (just as VineTune has done), other brands will work on taking something traditionally longer (like a movie trailer) and pack it into a six-second clip.