Swipely, a startup that allows local businesses to manage customer loyalty programs using credit card purchase data, is announcing new features, so those businesses can measure the impact that their online efforts have on in-store sales.

First, there’s a new capability called Campaign Insights. Founder and CEO Angus Davis said it’s built on the analytics capabilities that Swipely launched last year, except it applies those customer-tracking and segmentation tools to determine whether a company’s online and offline marketing efforts are successful.

Since Swipely uses credit card data, it can not only show whether a campaign brought in new or returning customers, but also how much those customers spent on average. It also tracks whether customers brought in by a marketing campaign continue shopping at the store, and whether the campaign seems to be driving Yelp and Google reviews.

Speaking of reviews, the other major addition is the ability to monitor reviews on Google, Yelp, and OpenTable, and to respond to those reviews from within Swipely. Customers can see how their average reviews compare to the competition. And they can overlay that data with sales information — so for example, a business might see that after a string of negative Yelp reviews, sales went down. 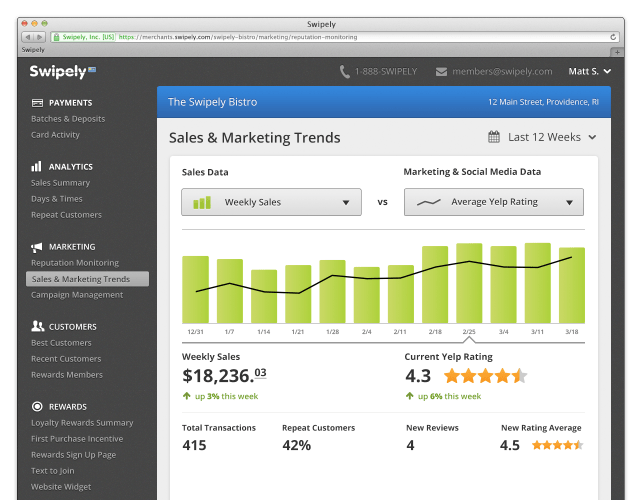 Davis acknowledged that Swipely can’t draw a direct connection between reviews and sales, but he said, “Merchants do like to see the data in one place.”

The new features will be available to Swipely customers in May, Davis said. He also said that Swipely is now supported by more than 50 point-of-sale systems — which is important for getting into stores — and that the company is now managing $500 million in sales for its 1.5 million customers. Ultimately, he said his goal is to turn the Swipely platform into “an online operating system for local commerce.”

By the way, you may remember that prior to building its current product, Swipely started out as a network for users to share their purchases with their friends. Earlier tonight, I actually wrote about Tophatter, the new product from Blippy, a previously competing company that also pivoted away from being a share-your-purchases social network.