San Francisco’s swanky new $300 million science museum has taken the bold initiative to encourage kids to ask, “what is normal?” Within the Exploratorium’s sea-side digs, a dingy 20th century exhibit on mental health is nestled conspicuously between light-bending experiments and lasers. Mental health clipboards detail the treatment of unfortunate individuals who were institutionalized and drugged for behaviors that, today, we would consider quite normal, including homosexuality. “Normalcy is a shifting landscape,” explains co-curator Pamela Winfrey, who wants kids and adults alike to understand how medical science helps define convention.

It’s most fascinating–and controversial–figure is “Frank C”, who was institutionalized for what doctors apparently called a “homosexual panic.” After being discharged from military service 1942, he went berserk outside of a restaurant. He told physicians, “I know that I am in the Kings County Hospital. I am not sick. I got excited on Fulton Street and I was throwing garbage. My blood temper. I went up. I was angry. In the Virginia restaurant I got a broken plate…I thought that someone planned to kill me”

Describing the treatment for his behavior, “doctors suspected he feared his own latent homosexsual desires; at the time, this so-called ‘homosexual panic’ was believed to lead to paranoia…he was confined in calm and quiet surroundings and treated with medication”. 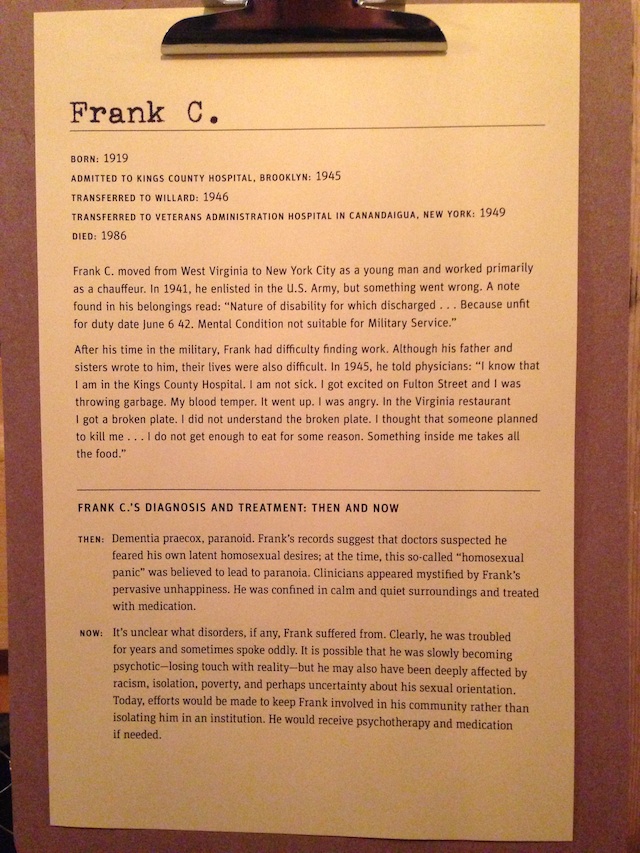 Classification of what is scientifically deemed normal has long been governed by the bible of psychiatric diagnosis, the Diagnostic and Statistical Manual of Mental Disorders (DSM). Its controversial 5th addition has folded Asperger’s disorder into a new umbrella category, the autism spectrum disorder. “Gender identity disorder” is now “gender dysphoria,” which refers to “emotional distress over a marked incongruence between one’s experienced/expressed gender and assigned gender”. In other words, what is “abnormal” today may be quite normal tomorrow.

Another important point of the “Changing The Face Of What Is Normal” exhibit, argues Winfrey, is that mental illness is both common and, often, transient. People go in and out depression. Conditions, such as Schizophrenia, do not always socially cripple the affiliated. And, perhaps most importantly, most people will either experience and be close with someone affected by mental illness. “it’s a way to be able to get to some of these touchy subjects in a way that’s safe,” she explains. In the wake of Internet activist, Aaron Swartz’s, suicide, mental illness is a timely and sobering topic.

The impact from this particular museum cannot be understated: the nation’s flagship science museum is a staging ground for exhibits all across the country. According to officials, it’s the largest teacher development organization in the Bay Area, and the travel exhibits touch more than 180 million people.

The hope, as Exploratorium director Dennis Bartels, explains, is to create “a population that actually thinks for themselves.”