Today, Microsoft has leveled more accusations about Google’s practices by way of its “Scroogled” campaigns. This time, the complaints are about how Google handles users’ data when they purchase an application from Google Play.

Previous “Scroogled” campaigns have targeted both Gmail and search over ads and privacy.

In the two videos below, Microsoft uses animations and words to walk you through “what might happen” if your data were to end up in the wrong people’s hands. It’s a fear campaign, and it really doesn’t have any basis whatsoever.

Take a look at the videos and we’ll get into what actually happens when you buy an app from Google Play.

In the second video, a “real life” situation is played out on the front steps of an apartment building:

A Google spokesperson provided us with the following statement:

Google Wallet shares the information needed to process transactions and maintain accounts, and this is clearly stated in the Google Wallet Privacy Notice.

Why the mention of Google Wallet?

The main difference between Google Play and the Apple App Store is that Google uses its “Wallet” service to process transactions. While it’s not a third-party service in the sense that it’s a different company, it is a function of the process that is not embedded into the Google Play experience. It’s something that users are made aware of in the terms of service and privacy policies when they sign up.

More importantly, when merchants and developers sign up to sell things in Google Play, they must buy into not sharing any of the information that they get, which is name, email address and general location — the things that all companies selling things online need in order to process your transaction and provide support. Better start your attack against Amazon, Etsy and everyone else on the Internet, Microsoft.

The timing is interesting on this, because this is the way that Google Play has always worked. Its privacy policies haven’t changed since last July, in fact.

At the end of the video, if you got that far, you’ll notice that Microsoft ends things with a big “Windows Phone doesn’t do it this way.” Instead of doing an advertisement on how great Windows phones and apps are, Microsoft has decided to go after how “horrible” Google is. The “Scroogled” site even has a big old link to explore Windows Phones. Isn’t that convenient? 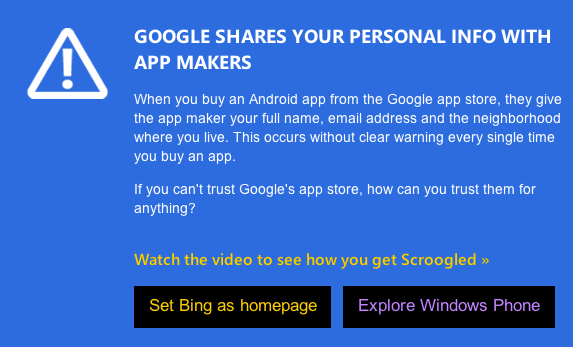 If Microsoft was purely trying to protect consumers from having their data “stolen” by nefarious app developers, don’t you think that it would focus on that, rather than trying to drum up business for itself?

You can’t put something on the Internet if it isn’t true, right? Wrong.

Wait, wasn’t that bearded “french” guy the same one that shows up at the end of the second Scroogled video? At least we know who is doing Microsoft’s ads now.