In the worst-kept secret in Austin history, Google announced in conjunction with the city that it would be the second location to get Google’s Fiber offering. Just a few hours after that announcement, AT&T made its own plans known for Austin, and it includes (surprise) 1 Gigabit Fiber, as well.

This ties to its previous announcement of the VIP expansion project for broadband access. The “advanced fiber optic infrastructure” will be given the same treatment that Google has gotten, which we’re told is just access to build out and work with the city, meaning no financial incentives are involved.

Here’s what Randall Stephenson, AT&T chairman and CEO, had to say in a release today:

Most encouraging is the recognition by government officials that policies which eliminate unnecessary regulation, lower costs and speed infrastructure deployment, can be a meaningful catalyst to additional investment in advanced networks which drives employment and economic growth.

Since rumors about Google’s plans have been stirring for weeks, AT&T had time to plan its move. While consumers should absolutely have many choices for Internet service, Google has been working on getting cities excited about having its Fiber service come to their own neighborhood.

In its release today, AT&T does say that it has invested $98 billion in capital in the past five years to U.S. communities and points out that it’s “more than any other public company.” The company also says that its potential capital investment is dependent upon “the extent we can reach satisfactory agreements” with cities, putting the onus on Austin.

We have a serious competition brewing. 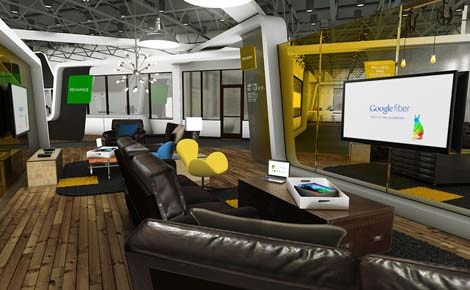 In a marketing campaign that is similar to NFL’s Super Bowl selection process, cities are putting together presentations and rallying cries on why they should be the next lucky location to get Google Fiber. AT&T hasn’t done anything like that yet.

Can AT&T bring out the warm fuzzies that Google has been attempting to with its Fiberhooding? Unfortunately it has legacy PR problems from wireless connectivity and speed issues that will drag down any announcement like this.