Alibaba Group announced that it has launched Juhuasuan Overseas, a combination of C2C retail platform Taobao Marketplace and group shopping site Juhuasuan, in Hong Kong and Taiwan. Juhuasuan Overseas will offer merchandise and services from selected Taobao sellers in the same daily deals format as the original Juhuasuan, which is accessible only to customers in mainland China because cross-border shipping is not supported. 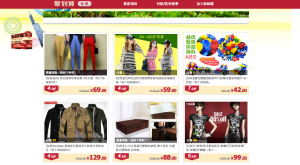 Juhuasuan Overseas currently offers between 12 and 20 new group shopping deals each day, and will begin selling localized lifestyle services and travel deals to Hong Kong customers in a few weeks. Daphne Lee, director of Taobao International Business, said in a statement that the new Web site will leverage Taobao Marketplace and Tmall.com’s (one of Alibaba Group’s B2C e-commerce platforms) 2 million existing customers in Hong Kong and Taiwan. According to Alibaba Group, there were 1.4 million registered Taobao users in Hong Kong and 600,000 in Taiwan as of the end of 2012.

Originally launched under Taobao Marketplace in March 2010, Juhuasuan was spun-off as an independent subsidiary of Alibaba Group in October 2011. Though it faced competition from other Chinese group-buying Web sites like Lashou, 55tuan, and Meituan, Juhuasuan has grown in part by partnering with local service providers throughout the country. That tactic has helped Juhuasuan grow into China’s top group-buying site, with 34 percent market share according to research group Dataotuan, double the share held by its next largest competitor, Meituan.