While Facebook’s press event focused on the “Home” app that runs on unforked Androids, HTC and Facebook have confirmed to me they modified Android to give the HTC First phone features not available in the downloadable Home app. This lets the First pipe in email and calendar notifications to its homescreen. And with the Facebook Home Program, other OEMs can get Facebook’s help fiddling with Android.

“Yes we had to implement some framework changes and some hooks to do the system notifications”, explained HTC Partner Manager Michael Goodwin. He tells us “all the things that could appear in your Android notification tray can appear within Facebook Home” thanks to the changes to Android.

During the event, Facebook CEO Mark Zuckerberg and Director Of Product Adam Mosseri also mentioned during the event that the HTC First was optimized to give the best possible Home experience.

[Update: After the event, I got to sit down with Mosseri, who told me “We didn’t fork Android, we extended it. HTC was helpful, and they actually wrote the code. We’ve worked with OEMs a lot and we pre-load a lot but we’ve created new APIs with a partner before but they were pretty convenient.” He then compared Google’s openness to Apple’s reliability, explaining “Apple and Android have taken very different approaches.    Apple’s want to ensure quality with control. I love iPhones, but Androids afford more opportunity. That’s good and bad. There’s more risk. People could make bad experience with [Android].”

These details confirm the intel from my sources last week that Facebook would debut an HTC handset running a modified version of Android that would give it extra functionality. The HTC First is now available for pre-order for $99.99 from AT&T, and will ship on April 10th for arrival on April 12th. 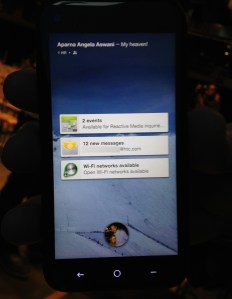 HTC’s President Jason Mackenzie explained why HTC put in this extra effort to optimize Home for the First. “It’s to provide a consistent experience. To offer the easiest, simplest solution for the customer. They shouldn’t have to get Chat Heads or messages from Facebook one way, and find out if you have text messages or email some other way. This delivers on Facebook and Mark’s vision of bringing your friends to the forefront instead of the applications.”

Home from Google Play only shows Facebook content on the homescreen, whereas on the HTC First and its flavor of Android you can get Google Calendar, Microsoft Outlook email, info about available Wi-Fi networks, and more notifications fed into your homescreen. Additionally, on the HTC First, you’ll be able to swipe up to to show your app shortcuts, and then swipe right to reveal a Google Search bar that doesn’t exist in the downloadable version of Home.

Now the question is what do other handset makers will do? Facebook has created the Facebook Home Program for OEMs, which “gives partners access to Facebook resources and partnership guidelines, helping them create a high quality Facebook experience for their customers.” Facebook’s goal is to partner with more OEMs to get Android customized for more phones. That could put “Facebook Phones” in more stores, potentially earn the social network some cash if they sell well, and get more people using Facebook all day long.

Watch the video interview with Michael Goodwin of HTC for more details.