Zozi launched in 2010 to become the go-to destination for those looking for an (affordable) excuse to take break from the daily grind by offering daily deals on a wide range of local adventures — everything from cocktail classes in Atlanta to kayaking in San Francisco Bay. However, after fighting it out in the crowded daily deals space for two years, Zozi shifted its focus to offering high-end, exclusive adventures and get-aways.

Instead of offering deep discounts and being the middle man for activities and multi-day tours, the platform began offering once-in-a-lifetime experiences that are hosted by experts and celebrities. With the launch of Gurus, Zozi allows users to not only go on a kayaking adventure, but paddle down the river with a world-record holder — or ski in Tahoe with Jonny Moseley.

Although these kind of elite experiences (and celebrities) are tougher to supply and by moving away from daily deals it loses some of its appeal to the Average Joe, investors seem to be buying into Zozi’s new approach, likely because there’s more money to be made in celebrity-backed tours.

Today, the startup announced that it has raised $10 million in growth capital and debt as part of a Series B1 round. Investors include Launch Capital, 500 Startups, Forerunner Ventures, Par Capital Ventures, Silicon Valley Bank, Dolby Labs Chairman Dave Dolby and Seamless Founder Jason Finger, among others. The additional capital brings the company’s total financing to $17.5 million.

Zozi is currently available in more than 20 cities across the U.S. and Canada, providing trips to a host of international destinations, while offering customers the chance to buy products from outdoor brands like Timbuk2 and Marmot, for example. The startup now employs a staff of 40+, with teams dedicated to curating its elite experiences, which now include activities like backcountry snowboarding with Travis Rice (a three-time X-Games Gold Medalist), gourmet cooking lessons with Michael Mina, vineyard bike tours and hardcore training with Ironman champion Chris Lieto.

Going forward, Zozi wants to expand its roster of celebrity experts and increase its options across local experiences and gear. It was also look to improve its technology around booking and customer relations, while expanding deeper into eCommerce.

Zozi co-founder and CEO TJ Sassani said that the key to the startup’s success, especially given increasing competition from other venture-backed adventure startups like Peek, is to give its customers “a trusted source to help them with discovery and curation of the most authentic experiences and the latest gear, while giving merchants an on-brand channel to connect with targeted new customers, who will become repeat buyers and refer their friends.”

Whatever the case, high-margin, high-value experiences seem to be working for Zozi, but until it offers full-contact, backcountry blogging lessons with select TechCrunch writers, there’s still a long way to go. 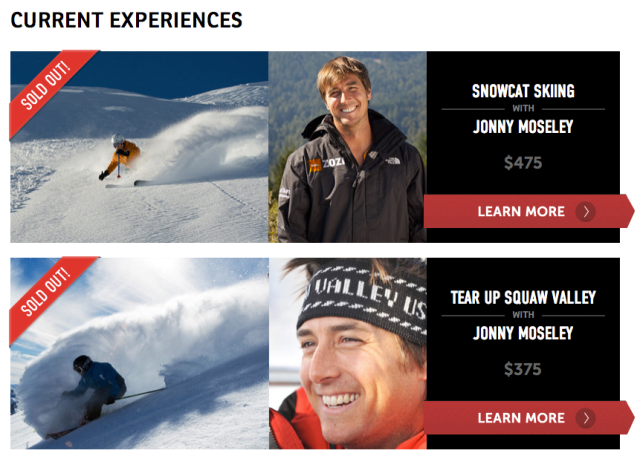