It’s not a belated April Fools’ Day joke (I think?), but today Amazon announced that it will expand its recently launched service called Amazon AutoRip to support vinyl records in addition to CDs. (Because people buying vinyl clearly want the sanitized digital copy of their tunes?…I kid, I kid.)

AutoRip, for those unfamiliar, was launched in January, as a way to offer Amazon customers free MP3 versions of any CDs they had purchased from the site since the launch of its Music Store back in 1998.

Going forward, any physical disc purchased on Amazon now comes with a free digital copy which is placed in your also free Amazon Cloud Player – the digital copies of your purchased tracks don’t count against your free storage totals here.

Starting today, any customer who buys a supported vinyl record on Amazon.com will also receive a digital copy of those tracks added to their Cloud Player library, which is also available across a number of devices, including iOS and Android smartphones and tablets, the Kindle Fire, connected TVs, and more, in addition to the web. 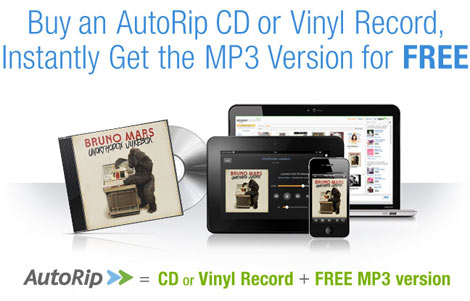 Already, AutoRip for vinyl is available for well-known tracks like “Babel” by Mumford & Sons, “The Lumineers” by The Lumineers, “Unorthodox Jukebox” by Bruno Mars, “All that Echoes” by Josh Groban, “Greatest Hits – Chapter 1” by Kelly Clarkson and “Alabama Shakes” by Alabama Shakes, the company states. Amazon says the service is available now for “thousands of records,” including titles from every major label, and more titles are added regularly.

To find those where the feature is supported, look for the AutoRip logo next to the item on Amazon’s site. (See above image for an example.)

Like AutoRip for CDs, the new vinyl support is also back-dated to include any other purchases that customers made since the launch of Amazon’s music store in 1998. Those will now also be immediately added to your Cloud library for free. Digital copies are available in 256Kbps MP3 audio quality.

“We’re thrilled to extend this experience to vinyl records,” said Steve Boom, vice president of Digital Music for Amazon in a release this morning. “Many of our music customers are vinyl fans and it’s traditionally been very difficult to make digital versions of vinyl records—now customers can enjoy the albums they buy wherever they are, not just when they have access to a record player.”

Amazon’s MP3 store now has over 23 million songs, but Amazon did not say exactly how many CDs and vinyl records support AutoRip today. In January, however, the service launched with over 50,000 albums and a promise of more on the way soon.