Flying somewhat under the tech press radar, Toothpick — an ‘OpenTable for dentists’ — has quietly exited Beta, as well as expanding beyond its native UK to the Netherlands, Australia and New Zealand. The London-based startup is backed by Passion Capital and various angels, including the founders of AdJug.

Interestingly, it comes at a time when U.S.-based ZocDoc, which targets both doctor and dentist appointments, and is backed by the likes of DST and Goldman Sachs, looks to be recruiting a UK General Manager as it readies a launch across the pond.

Meanwhile, another Toothpick competitor has emerged in the UK in the form of Zesty, albeit yet to launch. There’s also Poland-based DocPlanner, which appears to be (wisely) focusing on Eastern Europe. Either way, the space looks set to heat up.

And perhaps it shoudn’t be a surprise. By some estimates, there’s a $6 billion dental industry to be disrupted in the UK alone, with 120 million dental appointments per year, which should make the online booking part a decent business to be in. 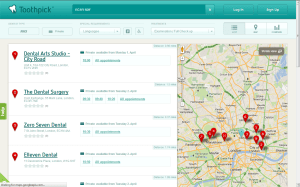 Founded in late 2011 by Dr. Sandeep Senghera (a practicing dentist) and Jozef Wallis, Toothpick operates an online directory of dentists, allowing customers to find local practitioners, compare prices and service, and to book online. In the UK, users can also specify NHS or private provision when searching.

The company charges dentists a low monthly fee to be featured on the site, with the draw being that it gives dentists access to new patients and can help them to fill empty capability, especially via late notice and emergency appointments. It also has an up-selling partnership with NASDAQ-listed Henry Schein Inc., whose software is used by more than 10,000 dentists in the UK, meaning that the Henry Schein salesforce are tasked with selling Toothpick’s offering alongside its own products.

To that end, after quietly launching late last year, Toothpick offers appointments at nearly 2,000 dental practices in the UK, with customers booking more than 1,000 appointments per week, says the company.