No one wants to read thousands of reviews. You just want answers. Luckily there’s TipSense, a new startup whose algorithm sorts big messy data sets. TipSense’s site DishTip tells you what to order at restaurants, for example, while its AppCrawlr deduces an app’s best and worst features and lays them out with competitors on a comparison chart. TipSense is so smart I bet it gets acquired.

…or at least fields plenty of buyout offers. That’s because while people won’t shut up about big data, few companies have viscerally proven to consumers why it’s important. David Schorr built and bootstrapped TipSense over the last four years to change that. I met him at SXSW, was very impressed, and he agreed to let me write the first official interview with him about his stealthy startup.

Schorr studied computer science with a focus on artificial intelligence at Cornell before getting pulled into Trilogy Software during the dot-com era. Later, after moving to San Francisco, he built an app called Weather Bonk to combat his girlfriend’s hatred of fog. It mashed up hyperlocal weather feeds, satellites, and webcams to find out where the Bay Area fog was, and Schorr sold the technology to The Weather Channel. 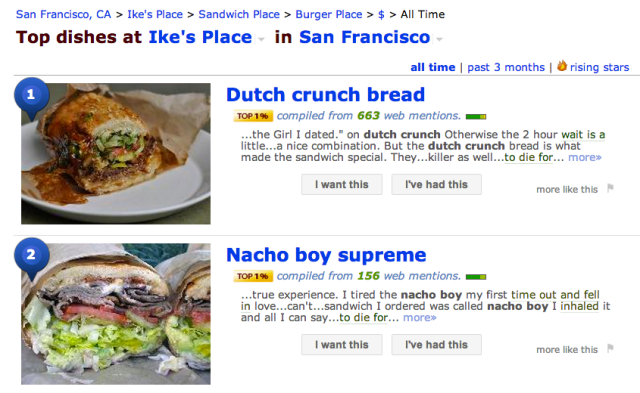 Since then he’s been cranking on TipSense, a platform for pulling statistically significant knowledge from unstructured semantic data sets. That means it can be applied to a wide variety of content types. Schorr tells me that until now the world simply “didn’t have the computing power or enough data on the web” to build something like TipSense.

But now “thanks to Moore’s Law and the exponential increase in content on the web, there’s the data and technology to uncover value” trapped in the words we post online. TipSense does some serious science, employing conceptual entity recognition, content fingerprinting, natural language processing, topic modeling, and more.

It Knows What To Eat

TipSense started by building DishTip, which tells you the most buzzed-about dishes at nearby restaurants by crunching millions of reviews, mentions, and photos of food on the web. By default you see the best of your city, but you can set it to your exact address for hyperlocal tips. You can filter by price, classification (e.g. vegetarian), and more, or look at top restaurants, cuisine types, or ingredients.

DishTip is best when you drill into a specific restaurant you’re at or plan to go to. Like a supercharged Yelp Highlights or Quick Tips, it lists the most-talked-about dishes. I checked several restaurants I frequent and it reliably suggested their best and most iconic menu items. DishTip told me to order whatever sandwich I get from Ike’s Place on their amazing Dutch Crunch bread, and to trust Yamo’s House Noodles With Beef — two things I learned after eating at these SF hotspots for years. If you’ve found your way to an awesome restaurant with a huge menu but you have no idea what to order, DishTip could deliver you to taste-bud heaven.

Since TipSense is a platform, it only took two months to build its second site AppCrawlr. It’s an app discovery engine that Schorr sees as a step up from Chomp and a huge improvement on Apple and Google’s app stores. 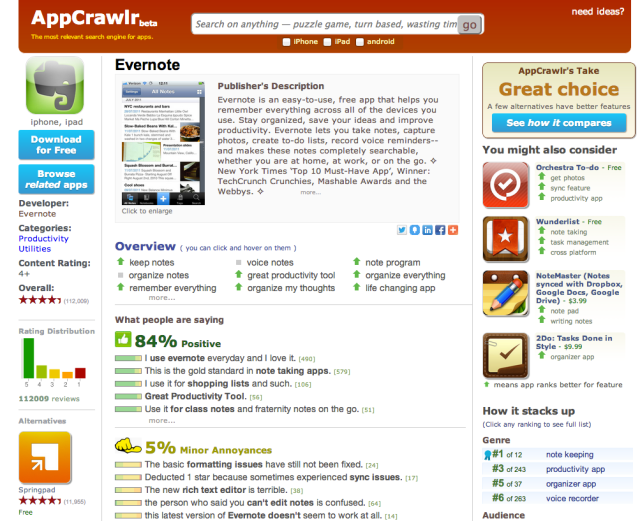 Say you look at the AppCrawlr page for Evernote. Beyond the screenshots, description and jumble of reviews you get on iTunes, AppCrawlr shows a summary of features, what the app is missing, what people say in positive reviews, minor annoyances about the app, and critical issues. It tells you if there are competitors that score better, what competitors you might consider and why, and where an app ranks in different categories like “Note Keeping” or “Voice Recorder.”

AppCrawlr’s most stunning feature is what it calls “Uber Grid,” a chart outlining the strengths and weaknesses of all of an app’s competitors. It can show that Evernote is great for capturing ideas and is pretty good at recording voice notes, but Wunderlist is better at task management and Remember The Milk excels at grocery lists. AppCrawlr can also deduce narrow categories of apps, so if you search for “Productivity” it can let you refine your search to “task manager,” “note taking,” or “time management.”

Both DishTip and AppCrawlr are far from perfect. There’s still a bit of data noise in the Uber Grids and they’re not totally accurate. The design of both sites could definitely use some help, too. But the sites make for solid demonstrations of the TipSense technology. They have their work cut out for them, as they’re aiming for growth at the expense of big boys like Yelp and Appsfire. Schorr says he could unleash his algorithm on people search, Q&A, events, and other data sets. When I asked whose data he’d most like to work with, he told me he thought TipSense could improve the Facebook news feed to surface trends in what friends are talking about.

TipSense is exploring monetization ideas but isn’t burning much money, as it’s surviving on the backs of a tiny team. That, and the fact that it’s bootstrapped could make TipSense a hot acquisition target. There’s plenty of tech giants with rivers of data to harness. Schorr concludes: “Everyone’s tossing around the concept of big data. A couple years from now it’ll be huge data, and then enormous data.”

But size only matters if you know what to do with it, and TipSense does.