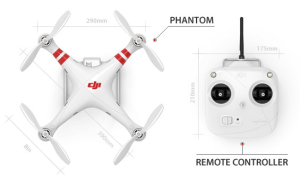 Back in 2010, our own John Biggs rightly described Parrot’s AR.Drone as ” the coolest thing [he had] seen in a long, long time.” Since then, Parrot has launched the AR.Drone 2.0 and while it’s still a very cool gadget, quadcopters have come a very long way since 2010. Last month, the folks at DJI, who mostly specialize in developing unmanned aerial systems for commercial use, sent me one of their consumer-oriented and GPS-enabled DJI Phantoms to review.

Most quadcopters are aimed at hobbyists and take a good amount of assembly and at least some experience with flying remote-controlled aircraft. The Phantom, which has a list price of $849 but currently retails for about $680, comes mostly pre-assembled and is extremely easy to fly, thanks to its built-in compass and GPS module. Thanks to having GPS built-in, the drone always knows where it is in relation to you. So depending on the mode you are flying in, every input you give will always be interpreted in relation to you and not in relation to where the front of the aircraft is (here’s a video that explains how this works).

The other cool thing about the GPS mode is that the drone can hover in position even if it’s windy. It’ll just auto-correct for the wind, thanks to its built-in autopilot (you probably want to turn this mode off when you are trying to take a video, however, as the constant corrections will show up in your videos).

This autopilot also kicks in if the Phantom loses its connection with your remote control if it flies out of reach or your remote runs out of battery, the drone itself is very low on battery, or because you turn it off to see if the autopilot actually works. Once the failsafe mode kicks in, the drone will simply fly up to 60 feet, fly back to where it first took off and land. I actually tried this and it worked surprisingly well. The drone touched down just about 3 feet from where I launched it. When you spent $700 on the drone and another $300 or so on a GoPro 3 Silver, that’s a nice feature to have.

The Phantom is a clear step up from something like the AR.Drone. Its communication distance is just under 1,000 feet and a maximum horizontal speed of about 32 feet per second and a descent speed of close to 20 feet per second. That’s fast and feels even faster if you are just learning how to fly it.

These specs show that this isn’t just a toy but can actually be used for some pretty impressive aerial photography. Indeed, since the Phantom launched earlier this year, a whole ecosystem has sprung up around it that provides owners with everything from improved propellers to cases and multi-axis camera gimbals. A gimbal, by the way, isn’t a must, but if you want to take really stable videos without the so-called “jello” effect (here’s a pretty extreme example of that), both a gimbal and some well-balanced after-market rotors will surely help.

Here is a video I took with the Phantom and a GoPro 3 White over the weekend:

The Phantom’s battery lasts just under 15 minutes, so you probably want to buy at least a second one, given that the package only includes a single 2,200mAh battery and a charger.

If you decide to get one of these, by the way, make sure you read the instructions and watch this series of videos before you turn it on. The Phantom may look like a toy and is easy to fly, but this is a pretty high-end piece of technology and there are a few things you need to know and do before your first flight.

With the 2013 NAB Show just around the corner, it’s a fair bet that DJI will announce a few new products in the coming days and we’ll make sure to keep a close eye on this company.