Vowels aren’t really necessary in today’s digital age, are they? Twitter doesn’t think so, as it announced a new “two-tiered” service including its free model called “Twttr.” You can only tweet without vowels though. Want the vowels back? Pony up $5 a month. Seems like a pretty sweet deal to me.

Luckily, Twitter really cares about its users and will offer up the “sometimes Y” free of charge…forever. Also free are vowels in link URLs. Whew.

If you’ve seen the text messages from anyone under 25 years old, you know that vowels often get left out already. This is pretty forward-thinking of Twitter, as it attempts to monetize its older set of users who can still speak and write using a real language.

Here’s what Twitter had to say about the disruptive approach to scl ntwrkng:

We’re doing this because we believe that by eliminating vowels, we’ll encourage a more efficient and “dense” form of communication. We also see an opportunity to diversify our revenue stream.

Here’s a mockup, with a condensed version of the legendary Barack Obama re-election tweet: 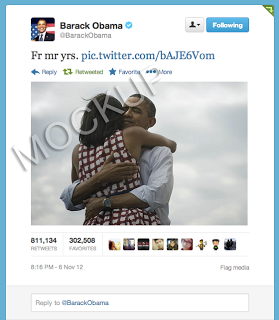 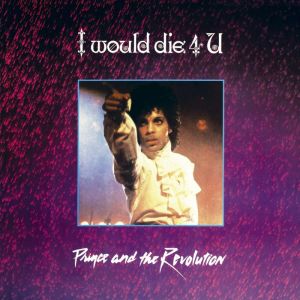 How did they come up with this amazing concept? Michael Sippey, Twitter’s VP of Product shared the brainery that went behind this genius move to beef up its revenue before next year’s IPO:

I was carpooling home after Twitter’s seventh birthday party with my head filled with images from our past, like our early logo where we spelled it TWTTR, in neon green toothpaste. And then Prince’s song “I would die 4 U” came on the radio. I felt like there was something there, but I wasn’t sure what or how to bring it to market.

Then later that night, I was watching “Wheel of Fortune” with @adambain, and a contestant yelled out ‘I wanna buy a vowel’. Everything just sort of clicked. Adam and I turned to each other and high-fived. It was one of those product moments that just felt like magic.

The company had some other revenue-producing ideas up its sleeve and will introduce extra characters, past 140, for a price:

In addition to our normal suite of Promoted Products for advertisers, we are now also offering a single character extension, expanding the length of a Tweet to 141 characters, for those moments when you need just one more character to finish your thought. The price of the extra character is based on a bidding system reflecting the popularity of the character you would like to add.

All of this will be rolling out slowly to a “small percentage of users” who actually believe things that are announced on April Fool’s Day. Twitter has some advice to get yourself prepared:

We recommend that you practice using only consonants (and “y”) with the hashtag #nvwls (or if you have paid for our premium service, use #icanhasvowels).

Go here to have a play. 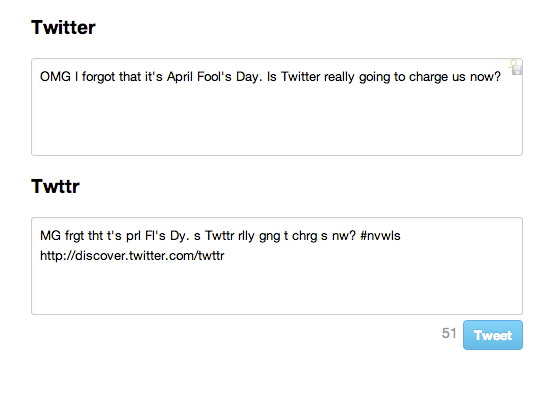 It’s kind of neat seeing the old Twttr name used for something again. As you know, it was the original name of the service.