I love my tiny little Mazda, but I’ll be honest — I still don’t completely understand how it works. That’s never really bothered me before (I’d much rather geek out over a phone or something) but a Kickstarter project from a small team in Boston has me itching to pay more attention to what’s really going on under the hood. Long story short, Dash combines a Bluetooth 4.0-enabled dongle that plugs into your car’s on-board diagnostics port with an iPhone app that gives you up-to-date information how on your car is holding up.

We’ve seen a few startups tapping into that particular port recently — Carvoyant inked deals with local auto dealers to more broadly distribute its always-on diagnostics and tracking gadget earlier this year, and Y Combinator-backed Automatic got plenty of attention for taking a similar concept and combining it with an awfully handsome iPhone app interface. Dash’s approach seems to resemble the latter slightly more than the former, but at their core they’re all trying to accomplish the same mission: to improve the driving experience by shining light on data that wasn’t always easily accessible.

So should you consider Dash over something like the ultra-slick Automatic when both devices are both slated to cost around $69? That all comes down to how you feel about the little tricks that set Dash apart from the oft-hyped California startup’s service. 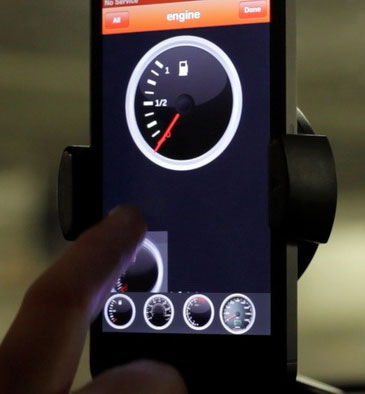 In addition to tracking fuel usage, passing along notifications when your car’s components have gone awry and letting people locate their cars on a map, Dash users can use their smartphone as a secondary display of sorts for realtime information like current speed, engine RPM, and fuel economy. The big idea behind latter is that you’ll be able to find an environmentally-friendly sweet spot while cruising along, though chances are you’ve already got some sort of indicator telling you how fuel-efficient your driving is if you’re driving a more recent car. Still, since U.S. cars from as far back as 1996 have ODB ports there are plenty of drivers who could stand to benefit from this sort of info.

Oh, and a side note: if Dash appeals to you because your car’s built-in speedometer and tachometer don’t work, you should really get that taken care of first.

In case you were hoping to bring your social fixation into your car too, all that driving data can be automatically uploaded to an associated online Dash account. From there people can compare their own metrics to their fellow Dash users and pick up on best practices for squeezing optimal performance out of their rides (sadly, there doesn’t seem to be a way to mock them mercilessly for driving like your grandmother). What’s more, users can also record and share in-car video with speed and engine information overlaid on top of it, well, just because.

Those of you looking to make your iPhone an extension of your car have to consider that the Dash still seems like a long way from fruition. At time of writing the team’s Kickstarter campaign has raised just over $15,000 from backers, and is ultimately shooting to top $750,000 before May 11. Should the Dash team meet that lofty goal though, they hope to get the first batch of dongles out sometime this June — just in time for summer roadtrip season. Sadly, just like with Automatic, Android users will have to wait until later in the year to get their mobile car diagnostics on.