So what do you do? Muni? Uber? Lyft? Sidecar? Hoof it? You could switch between half a dozen different apps and try to figure out which of the options is cheapest and fastest…

Or you could just open Corral Rides.

Corral Rides (“Corral” as in the thing that holds a bunch of cows, not “Coral” as in the amazing ocean animals) is a transportation aggregator. You punch in where you are and where you wanna go, and it breaks down the prices and times for each of your options. Walking? It’ll take you a while, but it’s free. Bus? The next one leaves in 10 minutes. Need to get there fast? There’s an Uber driver 2 minutes away, but it’ll cost you about $40 bucks.

(Note: Because of the services the app focuses on, it really works best in San Francisco at the moment.) 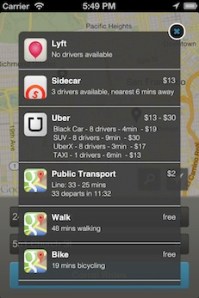 “But wait!” shouts a developer back at home. “Uber and Lyft and Sidecar don’t have public APIs! How are they getting this information?”

In a nutshell: it’s a bit of a hack. But don’t panic! It’s the good kind of hacking. Or, at least, the not-terrible kind of hacking. The Corral guys had to sniff out the APIs that Uber and co. are using to grab data in their own apps, and use those. They stop short of tapping any private APIs that require user authentication for security reasons, which means that the app has to switch you over to the appropriate app when you actually try to summon a car.

“But wait!” shouts the developer who seems to really enjoy shouting things at his screen. “Isn’t there a chance those services will get upset about this?”

Yeah, of course. But Corral is willing to play friendly:

“If any of them email us and ask us to stop,” says co-founder Noam Szpiro, “we will. The way we see it though, we’re just sending them free traffic and customers. If they want to be the option not listed, that’s up to them.” 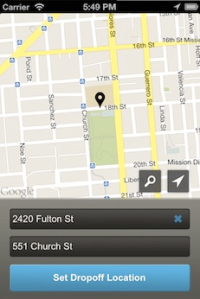 Corral Rides was built in about a month by Noam and his co-founder Snir Kodesh, both ex-Ooyala engineers. Corral Rides is actually a spin-off — a pivot, if you will — from a project they’d started a few months prior, which was meant to do a similar sort of aggregation across a broader array of apps (including things like restaurant reviews and reservations, movie times, etc.) When they looked at the data and realized that the vast majority of their test users were looking for transportation info, they decided to slim down.

Corral is thus far entirely bootstrapped, and they’re not searching for funding just yet (though they mention that they might look into joining an accelerator or incubator in the upcoming season).

It’s worth noting that this one app isn’t their entire long-term vision — it just plays a small part in it. They’d only fill me in on the big picture off-the-record, so I can’t say much — but what I can say is that if it all comes together, it’s going to be pretty great. These two guys are ones to watch.

You can find Corral Rides in the iOS App Store here, with an Android app being the next thing on the team’s to-do list.