Though it’s well-known that many of today’s mobile applications generate revenue through in-app purchases, a new report released today shows how powerful this money-making mechanism has become. In January 2012, just over half (53 percent) of iPhone App Store revenue in the U.S. was attributed to in-app purchases, but as of last month, that number has climbed to a record 76 percent.

The figure varies by region, however. In Germany, for example, it’s lower – only 61 percent of revenue in February came from these in-app sales. Meanwhile, in Asian markets the number soars. In Hong Kong, Japan, China and South Korea, at least 90 percent of all revenue comes from in-app purchases. 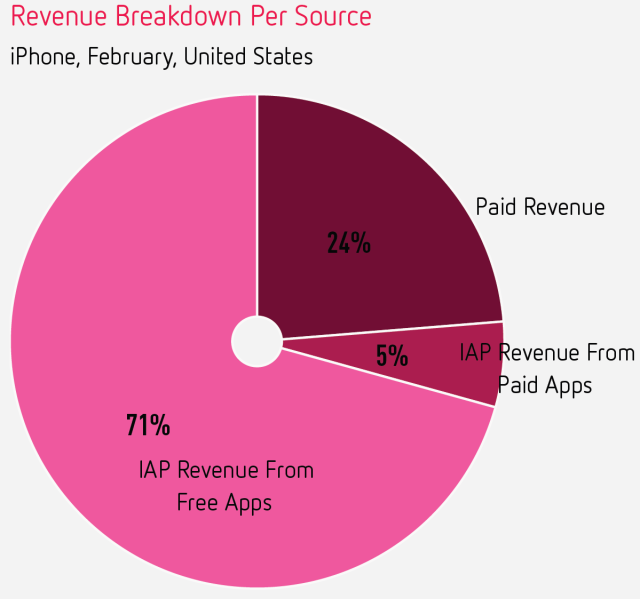 These findings are revealed in the latest report from app store analytics firm Distimo, which took a deep dive into the data in this month’s report. In particular, the report examines trends here in the U.S., looking at the business models chosen by app publishers who are using in-app purchases in their mobile applications on the iPhone.

Not surprisingly, Distimo found that the majority (71 percent) of apps were “freemium” applications, meaning that the app itself was free, but other features, virtual goods, extra levels, services, upgrades, and more are available for sale once the app is on the iPhone. Another 5 percent of apps using in-app purchases were paid applications, and around a quarter (24 percent) of iPhone apps in the U.S. were paid applications only, without in-app purchases involved.

In a crowded App Store where there are now some 800,000+ iOS applications to choose from, developers find it more difficult than ever to have their apps discovered, much less installed. Putting a price tag on the app itself is something that’s seen as a barrier to entry for curious or casual users, especially given that Apple’s App Store has yet to implement a “try before you buy” option, similar to what Google’s Android app marketplace, Google Play, offers through easy-to-access refunds and subscription content trials, for instance. App developers competing for precious homescreen space have clearly been cornered into adopting this business model, even though at times (and certainly in children’s applications) it can almost come across as disingenuous, or even shady, when not properly advertised.

And the move toward more freemium, in-app purchase based (IAP) apps is still occurring. As noted above, more apps are generating revenue through this method than just a year ago. Looking at the top-grossing apps from February 2013, which were released since January 2012, all were freemium applications.

Distimo also examined the top 250 grossing applications last month, again those released since last January, and estimated downloads and revenue to determine the app store metric known as ARPD, or “average revenue per download.” The resulting range of ARPDs here shows that though the business model overall is the one publishers are gravitating towards, how well it’s working on a per download basis varies wildly. ARPDs in the top 10 went from as low as $0.37 to as high as $7.04. 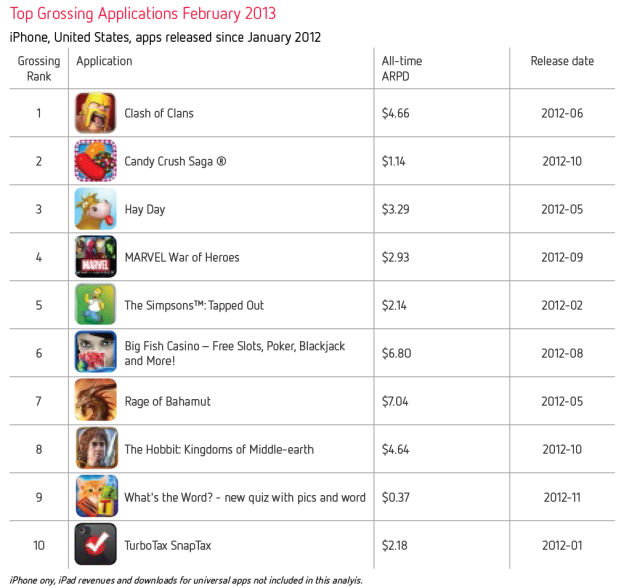 To determine which business model worked best overall, Distimo then looked at the top 250 grossing applications, where 170 were free with IAP, 53 were paid with IAP and 27 were paid only. (Apps which changed business models were discarded from the analysis. Ad revenues were not counted, either.) The average ARPD for all the iPhone apps is $0.99, says Distimo. 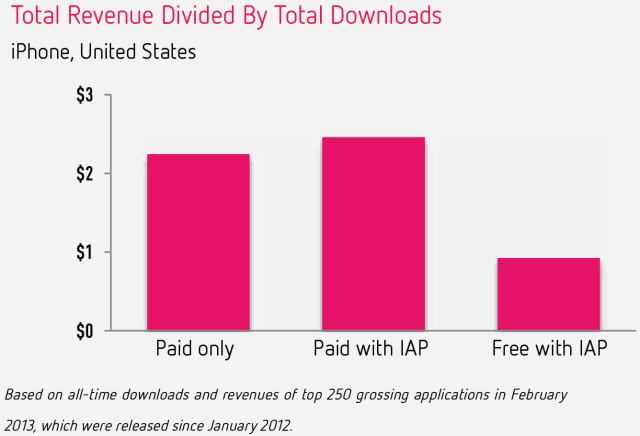 While the above focuses on the iPhone App Store, Distimo also dug into the iPad App Store to see similar trends. Here, average selling prices tend to be higher. In fact, the average price across the whole store is $4.46 versus $3.19 for iPhone, as of February 2013. 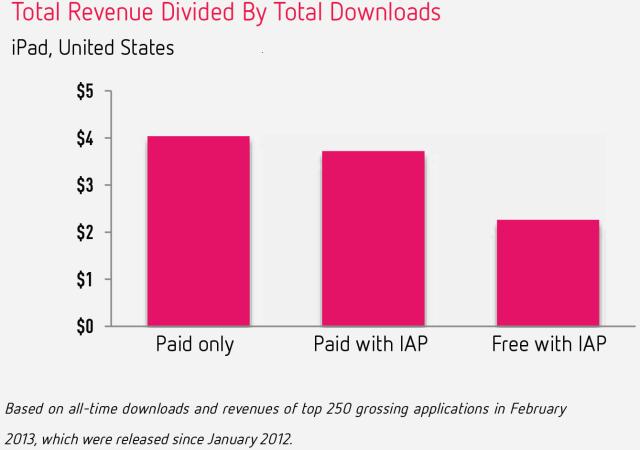 Overall, Distimo concluded that the average in-app revenue per download from paid apps is $0.98 on iPhone versus $1.26 on iPad.

The report then turned to non-U.S. trends, showing how Japan in particular has a high ARPD. Among the top 10 grossing iPhone apps in that country, the average ARPD is over $12. Distimo notes that it pulled “Puzzles & Dragons” from this analysis to prevent bias towards this game only; had it been included, the ARPD would be even higher. 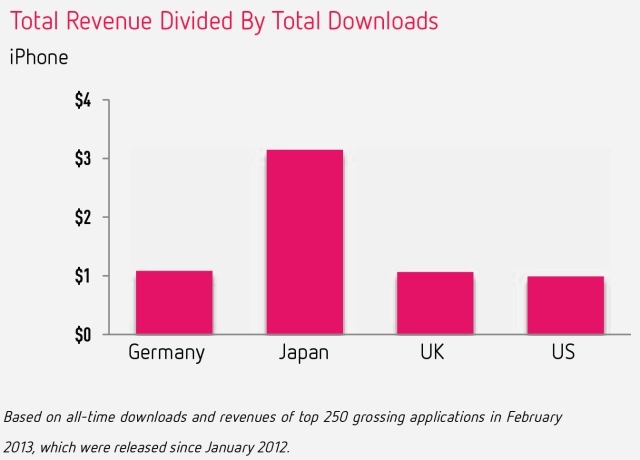 More data is in the full report here.