The company had previously raised $825,000 in funding from previous investors ff Venture, Lightbank and others, and it in the past, that was also characterized as a “seed” round. However, Centzy co-founder and CEO Jay Shek clarifies that the company is now referring to that earlier raise as an “incubation round,” in order to leave the door open for a Series A in the future.

First launched at TechCrunch Disrupt in May 2012, Centzy is focused on bringing detailed business data online – especially information that doesn’t exist anywhere else. As Shek explained earlier this year, 90 percent of Centzy’s data isn’t found anywhere else online because the business has never put that info online to begin with.

But Shek says part of the funding will help Centzy expand into new areas, such as personal care (shoe repair, dry cleaners, tailors, etc.), family care (daycares, retirement homes), gyms, home and car services. However, the company is still limiting its interest in businesses which could be classified as falling under the broader “errands” category – it’s not going after more complex services like car repairs or home repairs, for instance, because those problems require that a professional look at a problem directly, then provide an estimate.

“We found that a lot of people didn’t understand what ‘local services’ are,” explains Shek. “So we said, we help you with things that are like ‘errands.’ Errands are high-frequency of use services that exclude restaurants and bars, and exclude complex and expensive services,” he says. “We found that those services are where people are the most price and convenience-focused, so the information we provide is useful.” 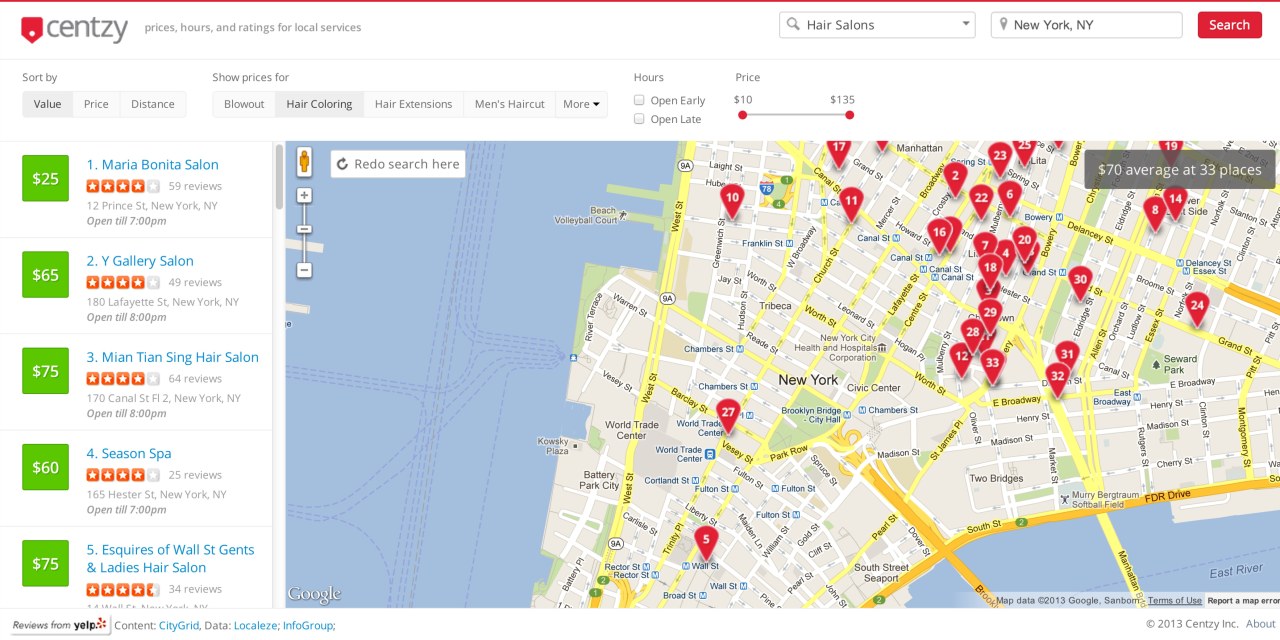 Centzy also apparently has a female appeal as well. Its customer currently skews 18 to 44, female, with an above average income, and minority (Asian, Hispanic or black). Shek says the female demographic appealed to Cowboy Ventures, the fund started by KPCB’s Aileen Lee. However, Lee says the fund goes broader than that – it’s not just focused on commerce and women. Cowboy Ventures, though, invested the largest amount in this new round, all of which was done via convertible note.

Just this February, Centzy announced it had expanded to the top 10 U.S. metro areas, and had grown its database of business listings to over 300,000. Today, it has reached 400,000 local businesses, and consumer traffic is growing 25 percent per month. 60 percent of Centzy’s traffic is on mobile, even though the company has yet to launched its mobile apps. Though, thanks to the new funding, those apps are on their way this year.

At present, Centzy is working to expand its service nationwide – a rollout it expects to also complete this year. And it’s working to develop merchant-facing tools, too, which will allow businesses to edit their own information, as well as post advertisements.

“We think of ourselves as the anti-Groupon,” says Shek. “At the core, every local startup is a marketplace between consumers and merchants. We started on the consumer side…and all the consumers who come to us are high-intent,” he explains. “Unlike a daily deal site where they essentially push an offer out to a million people and maybe .1 percent of them will buy, we have a pull model. We’re pulling in people right at the point when they’re ready to buy.”

Because of this angle, the consumers can convert to paying customers without the need for the merchant to offer a very large discount. It could even be just a matter of merchants posting their everyday specials online – like the “new customers take 10 percent off,” or the “2 for 1 on Tuesday” type of deals. 15 percent of businesses are already running specials like this today, Shek notes.

The merchant tools will also arrive to all merchants later this year, and the ad and lead gen services will be made available to paying customers. (Pricing has not yet been set.) Beta tests in the NY area are underway now.