With the launch of Stocksy this week, Bruce Livingstone is officially taking another shot at building a digital stock photography service. His last attempt, iStockphoto, which he founded in 2000, has since become one of the largest resources for stock images, media and design elements on the Web. And, as a result, Livingstone has become known as one of the pioneers of “microstock” or “micropayment” photography.

Having learned from the ups and downs of iStockphoto (and its sale to Getty in 2006), Livingstone is now on a mission to put a new spin on the world of stock photography. With Stocksy, the founder wants to create a digital licensing co-op and an online marketplace that is actually owned by its members and is dedicated not only to paying them for sharing their work with the masses, but to helping them sustain their careers.

To do that, Stocksy will give its photographers 50 percent of each transaction it sees, along with 100 percent on extended licenses. In addition to that, 90 percent of all profits will be divided among its members at the end of each year. And, what’s more, photographers accepted into the co-op will be given equity in the business and “will have a real say in how the business is operated,” he says.

Given how competitive the market for selling digital photos online has become over the years, these are some ambitious goals, to say the least. But it’s also true that Livingstone has a long history with stock photography — especially on the Web — one that dates back to the 1990s.

When the graphics company he was working for in the 1990s put the kibosh on his suggestion that they should begin selling online, Livingstone struck out on his own. He built a small collection of stock photography, but struggled to find buyers. Frustrated, he pulled a 180 and opted to give them away instead. In 2000, he founded and launched a site where people could register and download “as many high-res photos as [they wanted] and use everything with a royalty-free license,” he later told CNET. iStockphoto was born.

But, again a funny thing happened: People didn’t want Livingstone’s images; instead, photographers and designers wanted to upload their own images to share with the community. The platform started to snowball thanks to its user-generated content and, over the next year as bandwidth expenses became too high, iStockphoto began selling credits — but at a much lower price than competing stock photo sites. Users could get high-res images for a buck and artists got paid a royalty.

The site continued to grow from there — to the point where it now has millions of images, members and tens of thousands of contributing artists. In 2006, Livingstone sold to Getty for $50 million, where he stayed on as CEO until being fired in 2009.

However, in the years after the acquisition, the microstock and royalty model that Livingstone put in place in the early years was slowly eroded. Over time, Getty changed its format and licensing deals and decided to reduce its high royalty rate, which, as Fast Company points out, Livingstone himself defended. Since then, Getty has struck up a deal with Google that allows Google Drivers to use its photos in their work, paying only a relatively minor one-time fee.

Now, with the capital gained from the $50 million sale of iStockphoto, Livingstone has the runway to develop a model that is, in fact, much more favorable for the photographers. 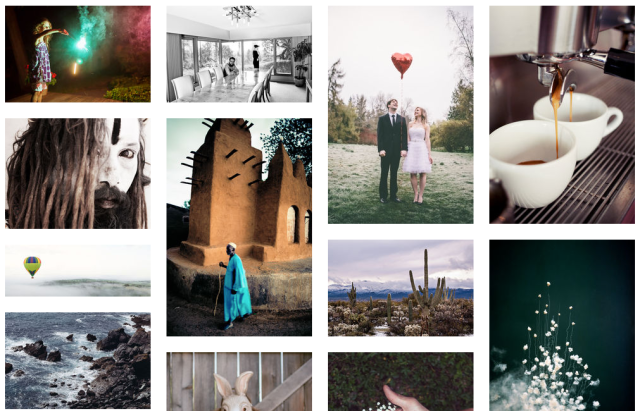 Again, as FC points out, compared to iStockphoto, which gives photographers 15 percent of sales and as much as 45 percent of exclusive sales, and Shutterstock which offers 20 to 30 percent royalties, the share that Stocksy doles should look pretty attractive to photographers. 90 percent of profits divided equally among contributors and shareholders at the end of each year? Hard to beat that.

Livingstone says that photographers have continuously sought him out to tell him how tough the industry is and how unfavorable the terms are for artists on most digital photography sites. So, while there are plenty of big names out there, like Shutterstock, the Canadian believes that there’s plenty of demand for the Stocksy model — one that gives photographers and artists a more equitable shake.

The model has already attracted people like Sean Locke, who Fast Company says had nearly one million license sales on iStockphoto until the company ended the relationship because he had criticized the Google Drive partnership, he explained on his blog. Locke is now one of 220 photographers on board at Stocksy at launch — photographers who are collectively uploading 1,000 photos each day and selling those images at prices that range from $10 to $100.

From that price range, it’s easy to see that Stocksy is making a play at becoming not only a resource for stock photography, but a repository for premium photography. The founder says that you won’t find the traditional, run-of-the-mill images that comprise the bulk of the inventory on most photography sites. Instead, Stocksy will prioritize quality over quantity, screening each image before it goes on the site.

Of course, Shutterstock also plans to launch its own premium stock photography site in the near future (called Offset), so even if Stocksy is seen as being relatively alone in the space for now, it won’t be for long. Stocksy plans to add vector-art illustrations to its catalog at some point in the near future, and may look to video after that, but it likely won’t be soon. 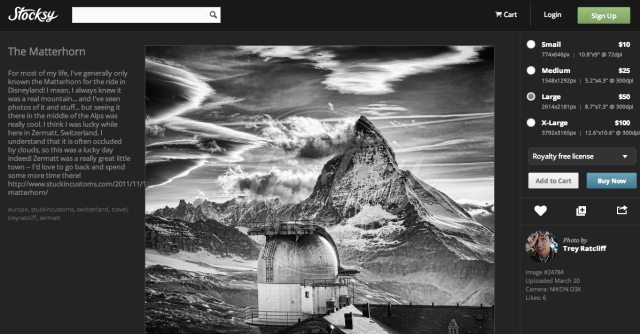 The problem is that, while Stocksy may be an incredible deal for photographers, the average person on the Web looking to use photography for their content or website (or whatever the case may be) isn’t looking to pay $100 for a photograph, unless they plan to frame it and hang it on their wall. So you won’t be seeing Stocksy opt for the iStockphoto or Shutterstock model anytime soon, and, naturally, that’s just the way Livingstone wants it.

The hope is that, just as consumers are becoming increasingly interested in Fair Trade coffee and how their food is grown, packaged and distributed, for example, and interest has grown in brands like Tom’s that put social good ahead of profits, they’ll be willing to do the same for photography. Stocksy may have a leg up on the bigs in this market by not worrying itself with profits and big quarterly returns, and it certainly has plenty of appeal to photographers.

Of course, being able to support the careers of its resident photographers requires enough sales to make that possible. There’s no reason to think it can’t get there over time, but relying on the consumers of stock photography to be as fair-minded as those buying Tom’s Shoes may mean that Stocksy is waiting for a long time.

In the meantime, check Stocksy out at home here.