Microsoft’s Bing search engine now knows quite a bit more about people and places, thanks to an upgrade to its Satori entity engine and a partnership with LinkedIn. This means Bing now features the profiles of “web-active” users, professionals and celebrities in its Snapshots bar and has a significantly better understanding about places and things. Today’s update, Microsoft says, marks the “most significant updates to Satori (which you will see show up in the Snapshot feature on Bing) since its introduction.”

The updated Bing doesn’t just show this information, though. It also makes it available through complex natural language queries like “Who won best actor in 2009?” The search engine is smart enough to understand that you are talking about the Oscars and knows that you are probably looking for Sean Penn. Because it also knows more about places, you can also ask it “What is the deepest lake in the world?” and get the answer immediately. For many of these questions, it is worth noting, Google doesn’t find an answer in its Knowledge Graph, though there are obviously some parallels between Knowledge Graph and Microsoft’s Satori project, which forms the basis of today’s updates.

In the view of Microsoft’s senior director of online services Stefan Weitz, Google’s Knowledge graph is indeed a “kick-ass encyclopedia” that’s great at highlighting facts. That, he said, “is interesting and hard and cool,” but he wants Bing to go a step further by not just linking all of this information together, but also by making it actionable. Restaurant data, for example, includes a link to reservations. Movie listings show you where you can rent online, and results about a school will show you where you can apply. And starting today, Bing is expanding this by adding more information about people, things and places to Satori, its answer to Google’s Knowledge Graph.

Currently, Weitz told me earlier this week, people searches account for about 10 percent of all searches on Bing. When it comes to people, profiles and Bing, the company that probably comes to mind first is Facebook, given that Microsoft already has a close relationship with the social network. However, most of the people searches on Bing, Weitz argues, involve people who are tying to find professional information about somebody, and that’s where LinkedIn has a major advantage (he did not exclude the possibility that Microsoft would add information from other sources later on, though). 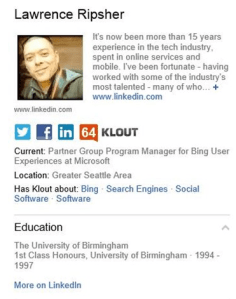 Just showing information about people, of course, doesn’t sound so hard, but most names are ambiguous and could refer to numerous people. Because of this, Microsoft often shows you multiple options in the sidebar and then allows you to choose the one you are looking for, similar to what Google does with the Knowledge Graph. Once you choose the right person, the search results will then update to show you relevant results.

Bing also, of course, still uses data from Wikipedia for historical figures and celebrities. For celebrities and some “web-famous” people, the search engine even goes one step further and offers links to their Facebook and Twitter profiles, as well as their Klout scores and other information it can find (think spouses, children, specific events they were involved in, etc.).

For regular Linkedin users, the Snapshot feature will show you the usual biographical stats you would expect, including a person’s current job, work experience and education background, as well as a list of related people searchers looked for on Bing (for me, that’s my TechCrunch colleagues Rip Empson, Anthony Ha and John Biggs, for example). Search results from LinkedIn that don’t immediately trigger the Snapshot feature but appear in the regular search results can now be expanded to show all of this information, too.

Sidenote: Earlier this week, a number of people spotted what looked like author images on Bing. While it does indeed look like Bing is testing this feature, this isn’t part of today’s launch, though it is likely based on data from Satori. Chances are we’ll hear more about this project in the near future. 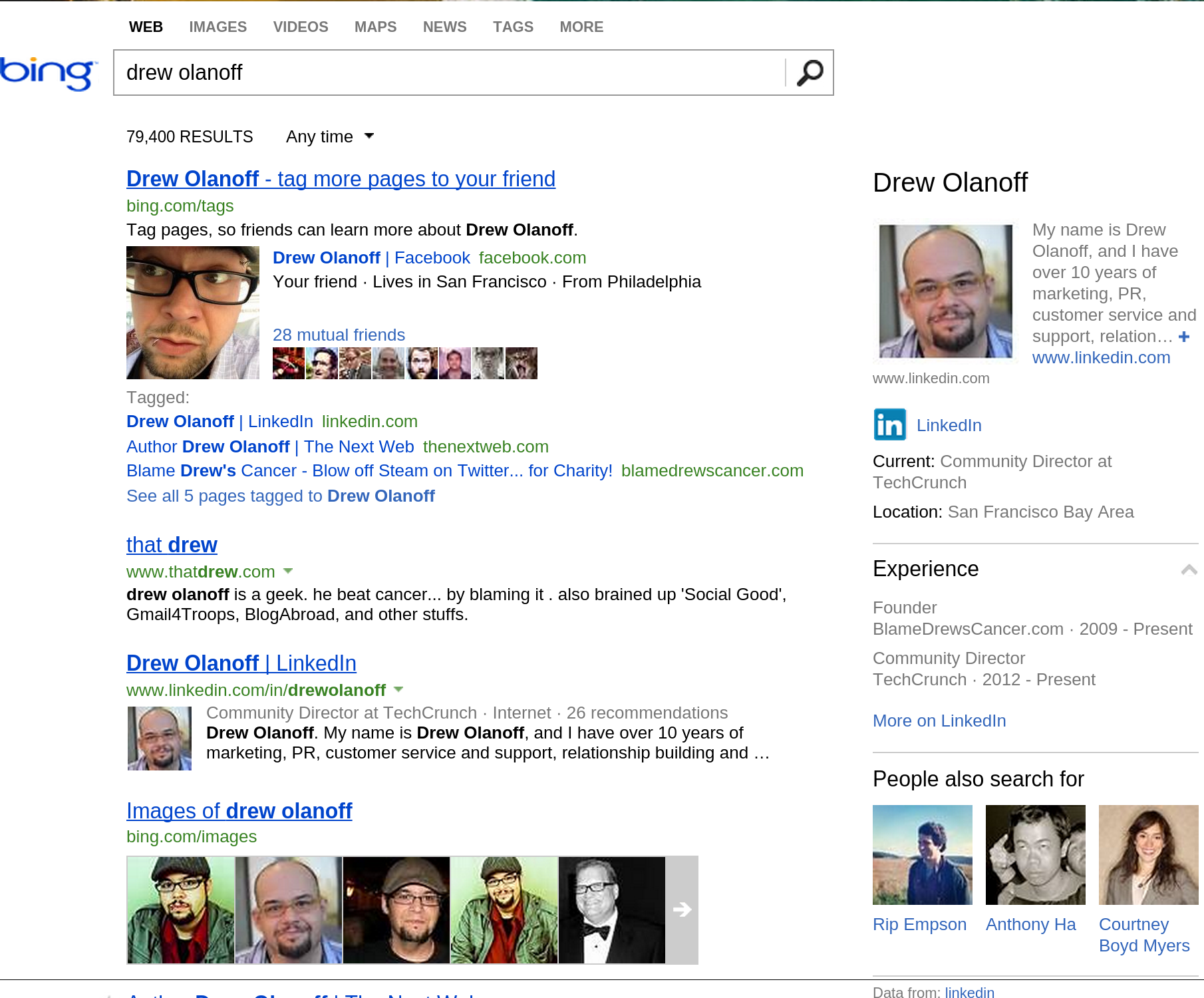 As for places, including landmarks, rivers and mountains, Bing now incorporates a large amount of additional information and can show you more data about local airports, attractions and other cities people search for in the Snapshots bar. Microsoft started adding some of this information to Bing last December, but today’s release adds a lot more information to these Snapshots.

All of these attributes, Microsoft writes in today’s announcement, “reflect Bing’s understanding of peoples’ intent when conducting queries about this specific type of entity versus another.” This also means much of this data is now available through natural language queries. 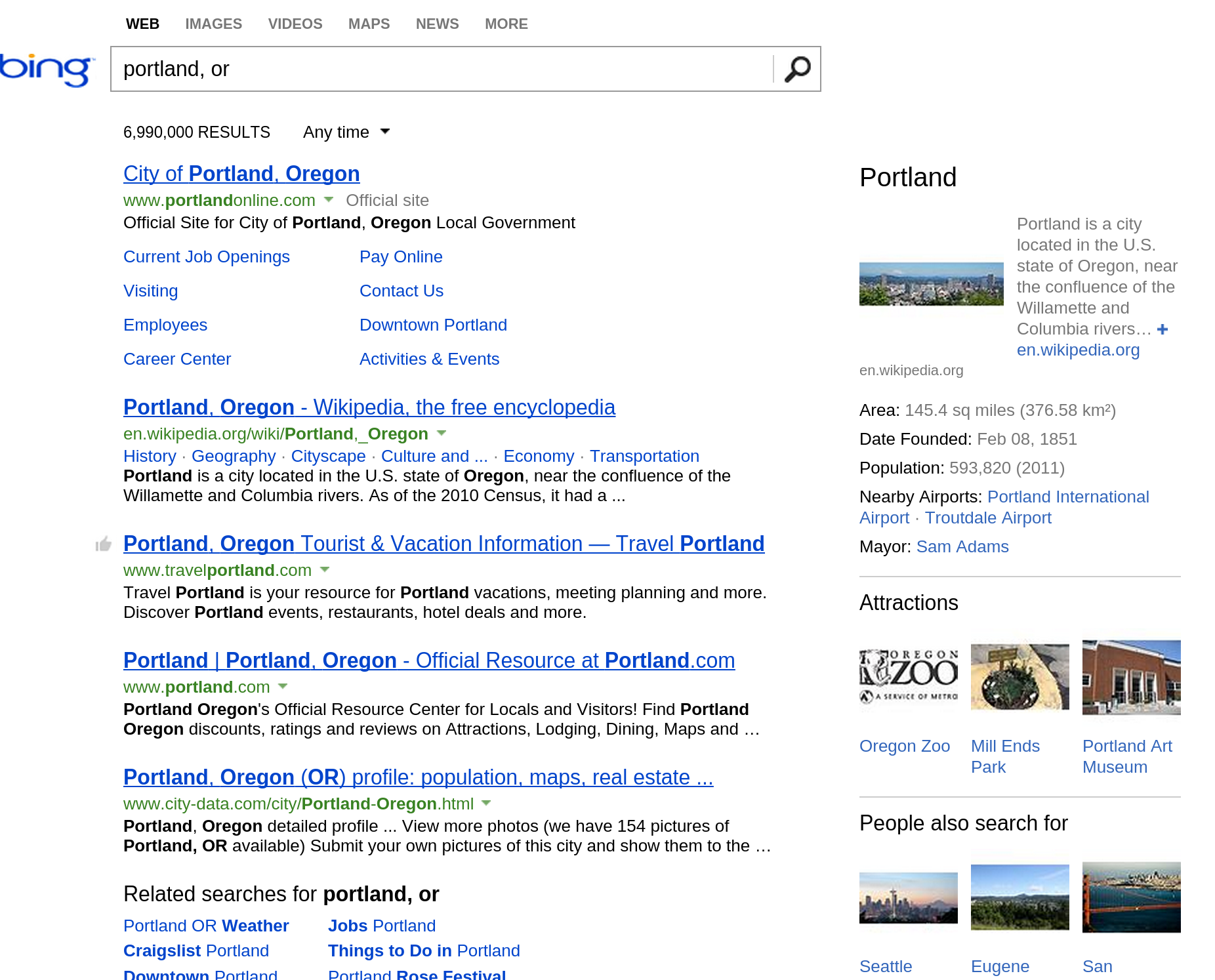 The Power Of Satori

People and places, however, are only a small part of this wider project (code-named Satori, Japanese for understanding) around entities that Bing embarked on a while back. The long-term vision of Satori is pretty bold. As Weitz told me, Microsoft wants to try to “make sense of the physical world by using the digital world as a very high-definition proxy.” Ideally, Bing will one day allow you to find out anything about any object. For the most part, that information is available today, Weitz said, but it’s spread across thousands of unique sites.

As Dr. Richard Qian from the Bing Search Team writes in today’s announcement, Microsoft believes that “the sum of these updates equates to a greater level of understanding about the world around us. This is a long journey, and we expect to deliver a number of additional improvements in the weeks and months ahead.” Qian also notes that “over time, Satori will continue growing to encompass billions of entities and relationships, providing searchers with a more useful model of the digital and physical world.”