The company provides an engine to advertisers that serves up ads based on targeted audience demographics. Companies spell out the parameters of their intended audience and AdzCentral’s ads are displayed to people based on what sites they’ve visited (tracked through cookies) or other information shared by partner sites.

Some companies call it “programmatic buying”, or “smart media buying”, or other permutations of the word “intelligent”, really, but it’s basically ad-matching. These providers are also responsible for the ads that seem to chase you around different websites pushing information that seems to be all-too-appropriate, such as previously browsed shop items.

The company’s founder and CEO, Reza Behnam said he industry estimates peg the U.S. market for ad-matching to be worth about $6 billion in 2015, making up about 25 percent of digital display ads in that year. This is up from 13 percent last year, representing some impressive growth, if it happens.

And in Asia, digital ad spend is about $25 billion, with only 3 percent of that based on ad-matching. That will become 20 percent in 2015, he said, citing other analyst estimates. 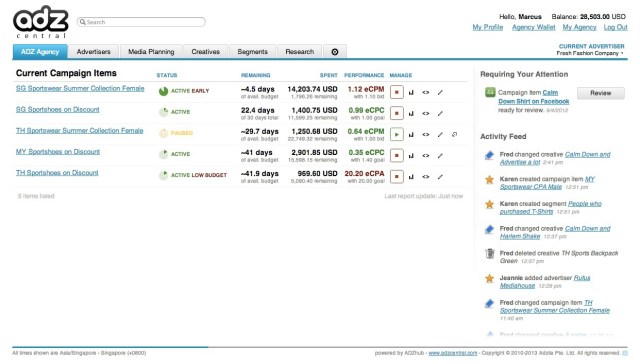 It’s the Asia angle that he’s counting on. AdzCentral competes with U.S. giants like Rocket Fuel and Acceleration (acquired by WPP), but being in Asia allows it to serve advertisers or Asian subsidiaries of MNCs, said Behnam. It counts brands like SingTel, Standard Chartered, Hyundai and 3M as clients, and has served about 1,000 companies over a base of 100 clients in its three years of operations.

The company isn’t profitable yet, he said, but is planning to spend its Series A money in Southeast Asian expansion efforts. It has “quietly launched” in Thailand and Malaysia so far, with people on the ground. It hasn’t set up offices in those countries, but it is looking to, he said. Vietnam and the Philippines will come later, and it has some advertising partners in India and the Middle East, he said. There are about twenty employees on the ground right now.

AdzCentral started in 2010, and won “seven-digit” seed funding in August that year from a group of angels that included the Singapore government’s National Research Foundation (NRF) and Joichi Ito-fronted Neoteny Labs.

Behnam was formerly the managing director of Yahoo for Southeast Asia in 2004, and was a venture partner at IDG Ventures. He is the vice-Chairman for the Singapore Chapter of the Interactive Advertising Bureau (IAB), a trade association of digital advertisers.