As you’ve no doubt heard by now, March Madness is upon us, with the NCAA tournament officially kicking off tomorrow. Yes, March Madness brings April gladness, as the saying goes. In fact, difficult as it may be to fathom, the NCAA men’s basketball tournament turns 75 years young this year.

There are many ways to celebrate and commemorate this annual event, which I would argue is one of the best in all of sports. Of course, there’s bracketology, betting and making enemies in your office by stealing the pool; in short, there are a number of tech-related threads floating around the NCAA Tournament this year, and below we’re taking a quick look at some of the more memorable examples.

But first, you’re probably wondering how to watch the madness live, online. The officially sanctioned way to do it is via March Madness Live, a digital offering from the NCAA, which includes iOS and Android apps and gives you audio and streaming video access to every game in the tournament.

Unfortunately, the experience is a little bit different this year. Last year, whether on the web, iOS or Android, users could pay for access to all 67 games, but in 2013, you’ll have to authenticate with your cable login info before you can watch games appearing on TNT, TBS and TruTV. On the bright side, games airing on CBS will be available for free — as these are the later and arguably more important games in the tourney.

You’ll be able to view games via NCAA.com, CBSSports.com or BleacherReport.

A young Bay Area startup called Pickmoto wants to make it easier for basketball fans to create pools, make picks and goad their friends into making horrible picks. The free-to-play app, which is  available for the iPhone and in a mobile-optimized web app for non-iPhoners, adds a spin on the familiar NCAA Tournament bracket, allowing fans to make picks round-by-round instead of having to pick the winners of every game before the tournament starts. 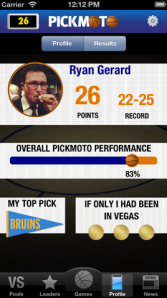 As I’m usually scrambling to make all of my picks at the last second (Thursday right before the first game starts), I, for one, am a fan of this approach. It levels the playing field by allowing you to adjust after each round — meaning there are no more first-round bracket busters with Pickmoto. Users get to make picks after seeing how teams are playing and form pools mid-tournament just for Sweet 16 games, for example.

Pickmoto initially launched its app in the fall as a way to offer simpler sports betting for the mobile experience, beginning with NFL and the NBA. Rather than designing a more detailed, stat-centric app à la awesome predictive tools for journalists and fantasy sports enthusiasts like numberFire, Pickmoto wanted to avoid replacing the fantasy experience and make a simple sports betting tool for everyday fans.

The new app goes for the same ease-of-use feel, offering an easy way to run your office pool, replacing the old group email and spreadsheet approach. Now the startup offers pools, chat functionality and wager management, prizes, stats, leaderboards and curated news, which have led to 15K downloads in the last two weeks and over one million picks to date.

Other bracket managers include, beyond NCAA March Madness Live, ESPN Bracket Bound 2013 for the bracket-focused gamers (which includes news, video analysis and game stats) and Simple Bracket for those who want simplicity, an experience devoid of ads and no gimmicks. You will need a Twitter account, though. 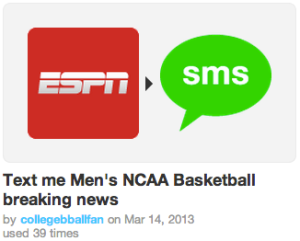 IFTTT, which stands for “if this, then that,” is an awesome service that allows you to connect all your accounts to its service (like Facebook, Instagram, Twitter, Dropbox, etc.) and create recipes that make them work together in clever ways. Basically, you can set triggers for specific actions (like, if I post an Instagram, automatically save it to Dropbox) in umpteen different ways.

This week, IFTTT announced that ESPN had created a channel that, once activated, allows you to follow and get automatic updates on breaking news from ESPN’s writers, along with your favorite teams. The channel is your “source for in-game updates and final scores for all your top teams,” the channel’s description reads. Of course, you see where this is going: There are tons of ESPN-related recipes therein, including those focused on the NCAA Tournament, like “Text me Men’s NCAA Basketball breaking news,” for example. Pretty cool. Thanks, IFTTT. Bless you.

You’ve probably already noticed this, but just in case you’ve been using Bing or Yahoo, Google is now embedding the NCAA Tournament bracket at the top of results for a number of tournament-related search terms. The bracket pops up first if you search for keywords like “Basketball bracket,” “March Madness,” or “NCAA tournament,” for example. As you would imagine, the embedded bracket instantly “gives you each game’s round, teams, rankings, date, and time, score, and winner.” TC’s Josh Constine has the full story here.

YouTube recently launched a new channel called NCAA OnDemand, which is set to become home to scores of clips and highlights from this year’s tournament. What’s more, the channel will also include a bunch of playlists, including upsets, best dunks, buzzer beaters, etc. Ryan has the full story here.

How To Watch From Work Or From Outside The States

While March Madness will be streamed live to viewers in the U.S., international viewers may not be so lucky. And, for the sake of productivity, there’s a chance your friendly local employer may block access to some of those sites. So, the same could go for you if you’re looking to watch the game while on the job. The word is that 30 percent of corporate IT workers have said their company will block streaming this year.

One option for both scenarios is to use AnchorFree’s Hotspot Shield VPN, which sets up a virtual private network to hide your IP address and allow you to access CBSSports.com, etc. The company said that visits to NCAA.com and CBSSports.com through Hotspot Shield increased in average by 710 percent during March Madness 2012, for example. Find more in Chris’ coverage here.

Other Apps Worth Checking Out

Back in November, ex-Googler Nikolai Yakovenko launched Chadwick, an AI-based app that attempts to reduce the noise of our social feeds and deliver immediate coverage of live games to your phone via text and push notifications. Chadwick has been updated for the NCAA tourney, and it shows a whole ton of improvement. Check it out here.

SportStream is another great app if you’re looking for that realtime, second-screen social media experience. The app feeds you a stream of tweets, video, Instagram photos, Facebook posts, play-by-play, and box scores on the games you’re following. A useful tool for March Madness fans. [More here.]