We know that Google’s Street View team has been making its technology smaller and more mobile, especially when it comes to people snapping images for Google Maps. Today, the team has shared some imagery from Canada’s Arctic territory of Nunavut.

The difference is that, unlike with the Grand Canyon, the person carrying the Trekker on their back wasn’t a Google employee. It was a resident of Nunavut, Chris Kalluk, who works at a nonprofit organization called Nunavut Tunngavik, which is working along with Google to collect imagery and build more detailed maps of the Canadian Arctic.

Much like the Street View team did for its snowmobile mission during the Olympics, the Trekker has been prepped to handle below-freezing temperatures, which are the conditions in Canada’s Arctic about eight months of the year, Kalluk explains in the post: “Winter up here is a way of life. And the only way to truly understand it is to see it for yourself.” 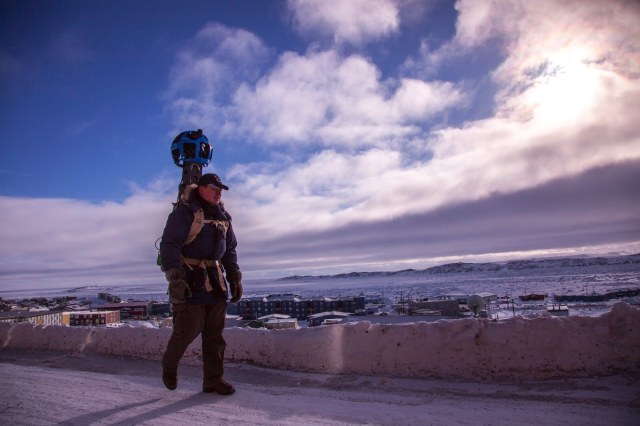 Here’s what Kalluk had to share about his experience, the first Trekker expedition in Canada:

I’m wearing the backpack to collect Street View imagery as I walk to the shore of Frobisher Bay, where the wind is the strongest and you can see the tide piling up mountains of sea ice. On the way I’ll pass sled dogs tied up outside houses, yapping in anticipation of their next trip. And I may stop to check out an igloo, built by Inuit craftsmen using methods passed down over a millennia.

As part of its commitment to build a comprehensive and accurate map of Canada’s north, Google visited my home, Cambridge Bay, last August and published imagery of the trip that fall. But this visit to Iqaluit marks the first time the Google Maps team has ventured into an Arctic climate during the winter months, where average temperatures can dip below -30°C [-25°F]. 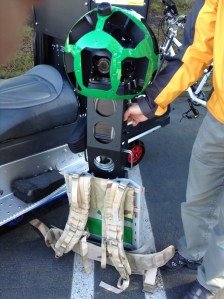 Kalluk and Google Maps Project Lead Raleigh Seamster aren’t just snapping photos with a backpack. The pair spent time with members of the community to discuss how Google Maps would like to collect all of the information about Iqaluit. He says that they spent time with locals explaining Map Maker, the tool where citizens can participate in the creation and updating of Google Maps.

Google is trying to get imagery and information out of every nook and cranny of the globe, and you can imagine a day where we’ll all be able to set out to our favorite spots that haven’t been documented yet, and feed that information back to a global database. In essence, with the tools that Google Street View and Maps have created, we’re all Christopher Columbus, re-exploring and documenting what people have only visited and snapped photos of for themselves and friends for years.

“I like to think of it as our chance to give you the lead sled dog’s view,” Kalluk said. In case you never visit Nunavut, Street View is your way of beaming there and visiting. The imagery isn’t available yet, but if the 9,500 Grand Canyon shots are any indication, it’s going to be pretty amazing.