Microsoft wants to make Yammer the social layer across all of its products and today, at Convergence 2013, the company announced a more detailed roadmap for how it plans to do so. Earlier this year, it started by integrating Yammer and Dynamics CRM, but the company obviously has larger plans for the former TechCrunch50 winner it acquired for over $1 billion. This summer, Microsoft will roll out an update to Office 365 that will allow its customers to replace the SharePoint newsfeed with Yammer. This fall, it will expand this integration with support for single sign-on and seamless navigation right inside of Office 365’s global navigation bar.

As Microsoft’s senior director of its Office Division Jared Spataro told me earlier today, this first integration of Yammer and Office 365 will be a “very simple integration.” This means, for example, that users still have to sign in to Yammer separately, as the single sign-on will only launch in the fall. The update simply replaces the “Newsfeed” link on Office 365 with a link to Yammer.com for now. 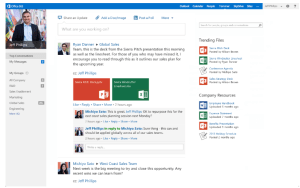 The version the company plans to launch in the fall will also provide “rich document capabilities, integrating the Office Web Apps to add editing and co-editing of Word, PowerPoint, and Excel documents,” Spataro writes in today’s announcement.

Come 2014, Microsoft plans to move to a 90-day update cycle for the social enhancements it plans to add to Office 365. It will continue to deepen the connections between Yammer and Office 365 and Spataro expects that these incremental enhancements will “combine social, collaboration, email, instant messaging, voice, video, and line of business applications in innovative new ways.”

For on-premise installs of Sharepoint Server 2013, Microsoft will launch the option to replace the Sharepoint Newsfeed with Yammer, creating what is essentially a hybrid service that mostly runs on-premise but uses Yammer in the cloud. This new hybrid deployment, Spataro, told me, should feel very natural to users. Obviously, this will remain a choice for the time being, though, and Spataro noted that the company remains “committed to the on-premise install base,” but that a number of users have asked for this integration.

In his blog post today, Spataro notes that he believes companies want to use Yammer for social. It is, he writes today, “our big bet for enterprise social, and we’re committed to making it the underlying social layer for all of our products.” For those who can’t move to the cloud and/or aren’t comfortable with multi-tenant cloud services, Microsoft says it is “realistic” and “committed to future releases of the server.”

For now, Yammer is only part of the Office 365 Enterprise edition, and Spataro wasn’t ready to announce its integration with other SKUs. But if Yammer is the social spine of Microsoft’s productivity suite, it’s probably a fair bet that it will move downstream to other editions soon, as well.