Grokr, the mobile app offering a “Google Now” like experience for iOS users, is today relaunching with a major redesign in tow. And even more notably, the company says that it’s planning to launch the app on Android, where it will soon compete against the real deal, so to speak. 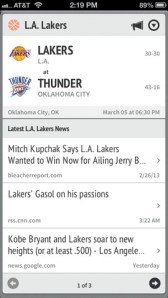 With today’s relaunch on iOS, the app offers a few more features – it has added support for “predictive March Madness” via its sports tile button, for example, and it can also alert you to nearby events and important occasions, like birthdays, as well as those from your own calendar. There are more news sources and sports teams available in the app, too, and you can better personalize your notifications.

There’s even a new “beta” tile which will allow you to test out Grokr’s upcoming features, in advance of their official debut.

However, the most noticeable change about the Grokr update is the way it looks. The sidebar navigation has been simplified, and the main screen’s tiles are whiter with just splashes of color, giving it a more “Google Now” like look and feel. It’s a cleaner design, overall.

When we first spoke to Grokr back in December, the startup was focused on building only for iOS. However, they’re recently changed their mind on the matter. Though iOS still dominates here in the U.S., the company says it wants to go after the international market, including emerging markets, which is why they’ve made the decision to build for Android going forward. In addition, the Grokr team says it has received interest from  hardware manufacturers and OEMs which are powered by Android – something which could hint at the potential for pre-install deals, deeper integrations, or an outright acquisition of what Grokr has built, perhaps.

Plus, we’re told that the company believes that there’s just more opportunity to innovate on Android.

The updated iOS app is available for download here on iTunes.