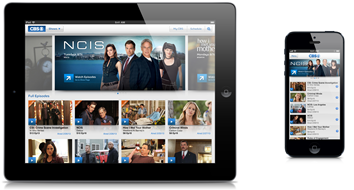 CBS is today introducing a new iOS application for iPad and iPhone, which brings its television programming to mobile devices, offering full episodes for streaming a week after they originally air. Shows that air daily, including daytime and late-night programs, will be available 24 hours after airing, the network says.

The company also adds that it plans to expand this application to support both the Android and Windows 8 platforms later this year.

The new app offers many, but not all, of CBS’s top television shows. The company notes that the app will offer NCIS, The Good Wife, CSI: Crime Scene Investigation, How I Met Your Mother, The Young and The Restless, The Late Show With David Letterman, Survivor, Elementary, and others. But some of CBS’s leading properties, including The Big Bang Theory and The Mentalist, are not available.

In addition, unlike streaming TV content often found on services like Hulu, Netflix or Amazon Video, for instance, CBS’s app is designed primarily to allow users to catch up on an episode they missed – it’s not offering all the episodes from a current season, or from seasons past.

The app will also offer viewers a social experience, starting with the launch of the Fall TV season later this year. At that time, the company will integrate social feeds, live events where fans can engage with CBS talent directly, and other second-screen experiences specifically for shows like CSI, Criminal Minds, Hawaii Five-O and NCIS: Los Angeles.

Meanwhile, users are able to personalize the app by creating a section of their favorite shows. They can tweet about the show or share to Facebook from the app, as well, or join in discussions with other viewers. 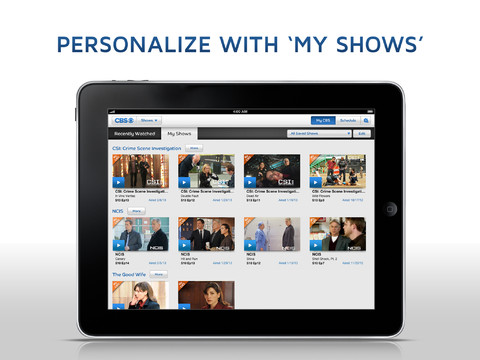 “Our online viewers not only want to watch their favorite shows on multiple devices, they want deeper engagement with the programs they love,” said Jim Lanzone, President of CBS Interactive in a release. “The new CBS App gives them the best of both worlds, letting people watch CBS shows on the best screen available for them, with a host of extra features that give them a richer viewing experience whenever and wherever they tune in.”

Notably, the move also allows for a new way for CBS to generate ad dollars for its content, as the app is offering ad-supported, or “sponsored,” programming. At launch, Buick will be CBS’s first partner on these efforts, whose participation means there will be reduced commercial breaks, as compared with traditional TV for the first several weeks after launch.

“We have been methodically and strategically finding new ways to satiate the appetite for our content on new platforms, while tapping into the tremendous revenue provided by doing so,” said Leslie Moonves, President and CEO of CBS Corporation. “Our announcement today achieves both of these objectives, while protecting our very healthy current ecosystem.”

CBS is the last network to launch some sort of streaming TV experience of its own on mobile devices. ABC has its ABC Player app, NBC has an app, and Fox has Fox Now. They all offer varying degrees of access to their television content, but none provide complete lineups of what the network has to offer.

CBS has been moving to bring its TV content to streaming services in recent months. In November, the company finally signed a deal with Hulu after years of remaining the broadcast holdout on the service. Like this new app, the Hulu deal didn’t include access to some of the network’s most popular shows, like Big Bang Theory, which remains difficult to watch on mobile devices (as is the point, apparently). However, this and many other top shows are available for streaming from the CBS.com homepage.

The company also signed an expanded deal with Amazon this February, bringing a handful of new properties, including America’s Next Top Model, Everybody Loves Raymond, Jericho, The L Word, Undercover Boss, and United States of Tara to Amazon’s Instant Video platform. Amazon and CBS previously had an agreement that offered users access to some new and much back-catalog content, including things like Star Trek, Frasier, Medium and Cheers. It also struck a minor deal with Yahoo to bring entertainment programming to Yahoo’s online property omg!.

CBS is today introducing a new iOS application for iPad and iPhone, which brings its television programmi...