Great news. You’ll now know the viewing preferences of your friends’ kids on Netflix, thanks to the service’s foray into social sharing via opt-in Facebook integration, announced earlier this morning. Because the company rushed to launch the feature ahead of a product release, which would allow family members and other shared account holders to set up their own profiles, that means parents will be inadvertently opting their children in to sharing their preferences for “Rugrats,” “My Little Pony,” and “Dora the Explorer.”

Okay, that’s just what the TechCrunch’s staff’s children are watching, but you get the idea.

It’s easy to see why Netflix was eager to make its social debut. It has lobbied for over a year for permission to share user activity on its site, as well as to Facebook where so many other companies already share today. You can’t visit a friend’s Facebook profile without news of what songs they’ve been streaming on Spotify, what YouTube videos they like, or what photos or videos they’ve captured, liked, or re-shared using a wide variety of mobile apps. It only seems fitting that Netflix should be able to get in on that action. 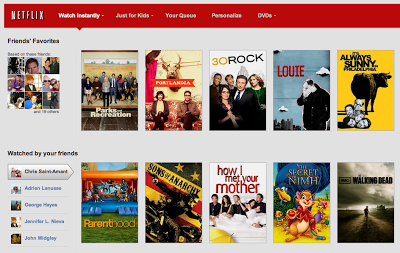 The problem, however, was that outdated legislation from the 1980s prevented Netflix from participating on the social web until now. The original Video Privacy Protection Act was passed in 1988, after a Supreme Court nominee, Robert Bork, had his video rental record published by a journalist. Congress reacted by making it illegal for video providers to share what their users watch. Though video rentals turned into DVD-by-mail services (and later became online streams), and though we have entered an age when users were opting in to sharing on social services like Facebook, the law prevented Netflix from participating until President Obama signed into effect the new, revised law, which finally passed Congress at the end of 2012.

And Netflix jumped at the chance to go social, seemingly without thinking about the user experience in full.

Unlike Facebook accounts, which are tied to one individual, Netflix accounts are often tied to multiple people – a couple who lives together, a family with children, even roommates. For these types of account holders, Netflix ends up with a confusing array of user data. Imagine trying to make sense of someone’s preferences, when they watch both horror movies and kids’ cartoons! (Although, that might describe some of the Reddit crowd, I guess.)

But for a company that once paid out a million dollars to developers who could improve its algorithm by 10 percent or more, Netflix lives and dies by its power to keep users interested in paying for continued access to its content. Every time you finish one title, it should be able to tempt you with another you would want to see. So at its core, social integration in the Netflix platform makes sense, because very often the people we trust for movie and TV recommendations are our friends.

However, by implementing social features before the launch of user profiles on Netflix, the company is pushing to establish its social presence before it’s offering a social platform that’s actually useful to a large number of its own end users. It’s a greedy land grab, more focused on getting on the viral boost that being on Facebook provides than on what this will mean for those doing the sharing.

It’s not just about parents, who will now be broadcasting their kids’ viewing behaviors to friends, it’s about junk data. Anyone who shares a Netflix account has a queue, favorites and recently watched list that’s a confusing mashup of what others in their household like, watch and save. It’s not a signal that would make sense to any of their friends.

Fortunately for users, Netflix won’t make you wait forever until this issue – and it’s a large one – is resolved. The company first debuted its plans for personalized Netflix user profiles at this year’s CES in January. During its private trials, these profiles allowed household members to set up their own accounts, complete with an accompanying avatar, in order to segment viewing history and recommendations. It will also allow for additional parental controls in terms of what content kids can see based on ratings – similar to Netflix’s “Just for Kids” user interface available today.

The company says that work on these user profiles is continuing, and testing is expected to conclude sometime this summer. “We will need to look through the test data and decide whether or not to launch after concluding the test,” a Netflix spokesperson tells TechCrunch. “We will only launch a feature if it actually gets used and leads to more streaming. We don’t want to introduce features that reduce streaming activity.”

With the social integration available today, people will only be able to link their Netflix accounts to a single Facebook account, though.

So to my friends, apologies in advance, but we watch a lot of Dora, Diego, Super Why, TinkerBell, Sesame Street, and Bo on the Go these days.

I’m not sure that’s going to help you very much with your recommendations.