Google recently killed a newly discovered feature called Google Now Topics, which apparently wasn’t quite ready for primetime. The feature appeared to be a useful, if perhaps a little creepy, means of revisiting your past web searches performed using Google Search through a visual, Google Now-like interface.

“Topics” was discovered over the weekend by the folks at the unofficial Google-watching blog, Google Operating System. When it worked, you could visit the URL “https://www.google.com/now/topics” from your Android device in order to see a card-style user interface that displayed your past searches, broken down into various categories. Beneath a title and lead image, the text prompted you to “continue your research” and “explore now.” 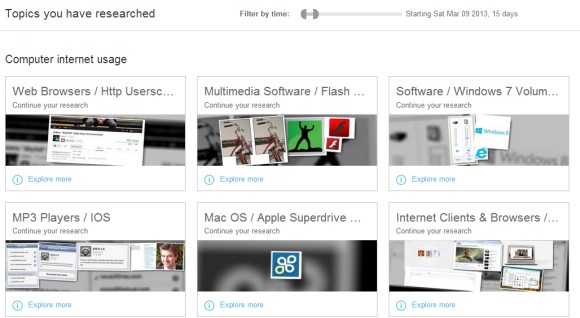 Being a regular user of Google’s My Search History, I liked the idea that there was going to be an appealing, mobile-friendly format to delve into my past Googling. But it was a little shocking to see all of my search history laid out on one page like that, I have to admit. All at once, I had a visual image of just how much Google really knew about me.

But as I’ve long since traded my privacy for free services (Google’s and otherwise), I quickly found I could stomach the reveal.*

*Note, not my screenshots below.

Unfortunately, just as quickly as Google Now Topcis appeared, it was gone. Soon after the blog post went up, the page began to 404. Requests for more information and a better explanation from Google have also gone unanswered.

We have to assume that Google was just kicking the tires of a yet-to-launch addition to the increasingly useful Google Now passive search functionality, which ships on phones running the latest version of Android.

Although today, Google Now is more focused on delivering you up-to-the-minute info, like flight delays, weather, traffic reports, restaurant reservations, birthdays, and more, it’s easy to imagine it morphing into a more fully fledged, “lean-back” search service that offers Topics as an alternative to typing on mobile phones’ small screens. Or maybe even more, given Google’s plans to bring Google Now to its Chrome web browser.

Yes, I’m really sorry that I didn’t take a screenshot of Google Now Topics myself (the one time I don’t!), but others did. All I can say is that I can confirm that this did work at one point, and hopefully it will again soon.

Image credits: Google Operating System; Oh and this googler, who didn’t get the memo that this was all hush hush.