Cobook, a Mac contact management app that made its way over to the iPhone back in December, is today launching version 2.0 of its service which introduces a new feature called “Livecards.” This feature does what everyone wants address books to do these days – automatically update their contacts with the most current information.

It’s bizarre that in this day and age, we’re still struggling with a feature that should be so simple. An automatically updating address book is something that our email providers should have implemented for us ages ago. Google is doing this in its own way now, but via Google+, which is not for everyone.

And as innovation in the address book space has stagnated among the big players, that’s left room for startups to come in and try to fix the problem. For example, late last year a company called Addappt launched a similar app to Cobook, also with a heavy focus on the auto-updating functionality. 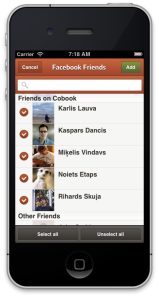 However, the problem with many of today’s solutions is that they work best when everyone uses the same platform. In that regard, Cobook is not much different.

For what it’s worth, at least the solution Cobook has implemented to fix the problem is relatively simple. After updating Cobook on iPhone (or upon first install for new users), it will prompt you to “Connect Livecards” when you launch the app. You’ll tap a button, fill out the info you want included on your own Livecard (name, company, email and phone), select the friends you want to share with, and then send them a message which they can either confirm or ignore.

Of course, this sharing process also serves as a nice viral way for Cobook to gain some traction through users’ friend networks, too.

Currently, this messaging and friend-finding functionality only works via Facebook, but Cobook’s founder and CEO Kaspars Dancis says that email registration will arrive shortly. He also confirms that the startup does not upload your address book data to its centralized servers.

“The only thing that needs to be synced through our servers is your Livecard,” he explains. The sharing is explicit, he adds, and you control your own Livecard containing the information you want to publicize. That’s a bit different from Addappt, which shared my “Me” card, without first letting me select the fields which I wanted to keep private. Instead, I had to make a duplicate, simplified contact card for myself, and set that one as “Me.” Cobook’s system is more straightforward.

The Livecard feature is also optional, so if you would prefer to only use the app for address book management and not for sharing, you can. (Also, you’re crazy).

If you haven’t used Cobook yet, and you’re a Mac and/0r iPhone user, it’s worth taking a look at this one. Although the startup has competitors in the social address book space – Brewster and Xobni’s Smartr, for example – Cobook’s app is pretty powerful in that it not only works with your iCloud contacts as a replacement address book, it also syncs your iCloud and Google Contacts, and pulls in data from social networks including Twitter, LinkedIn, and Facebook, as well. Most importantly, its sync process is conflict-free, unlike the much more painful experience using Apple’s native Mac address book.

If you’re a current Cobook user who had previously done a lot of customizations and categorizations of your contact list, including favoriting people, manually updating their info, merging their social profiles, tagging them, etc., those changes are saved upon updating to version 2.0, but it might take a couple of minutes for everything to sync, depending on the size of your address book.

The updated iOS app is here in iTunes.

Cobook, still a bootstrapped company out of Lativa, has half a million users today. Dancis says that an Android version is now the company’s next priority.