Whales are big spenders, the ones that prop up casinos and social games. In music, whales are bands’ rabid fans. BandPage‘s new “Experiences” feature lets artists sell them seats on stage, unique merch, or even a trip to the bowling alley with the band. The shift from MP3s to streaming means monetizing the long tail that earns musicians cents not dollars, but BandPage Experiences could keep them afloat.

Whether you’re a chart-topping artist or a garage band, somebody loves you, and they’re willing to pay a ton to get closer to you. BandPage Experiences creates a marketplace and an embeddable e-commerce widget where artists can offer less-scalable VIP access, meet-ups with band, and limited-edition merchandise.

It’s a smart new experiment from BandPage. Once known as RootMusic, BandPage lets artists set up a profile app on Facebook full of streaming music, tour dates and media. At one point it had 500,000 bands and 32 million monthly Facebook users. It made money on a cheap subscription to extra customization and virality options, and raised a total of $18.3 million.

But Facebook’s Timeline redesign a year ago hit it hard. Without the ability to be a band’s default landing page for non-fans, traffic plummeted to around 1 million users. Since then it’s tried to unshackle from Facebook with BandPage Everywhere and Connect, which lets musicians create synced websites and widgets so they can publish once but update all their online presences.

BandPage CEO J Sider explains that most artists are missing out on huge revenue by restricting themselves to standard touring, merch and music sales. “It’s like a coffee shop that’s only open two or three times a year. We want to open it up year-round. If they gave you more experiences, you’d be willing to spend more on the [artists] you really love. It’s for well-known acts down to bands that are just starting out [for who] earning a couple hundred extra bucks per show can make a big difference.” 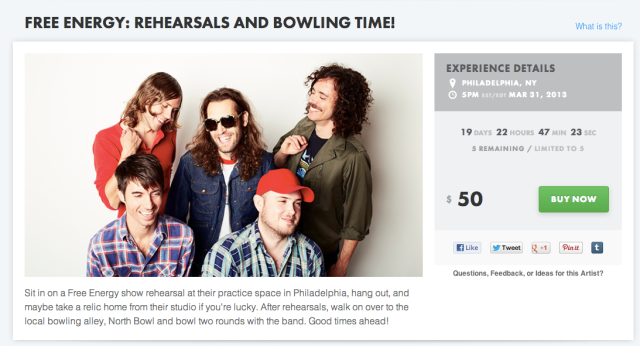 Along with helping artists get richer, Experiences turns BandPage into an e-commerce company that will earn a 15 percent cut of what bands earn by offering special treatment through Experiences. By definition, artists can’t sell too many of these unique opportunities. BandPage has to hope the idea of hyper-monetizing the short head rather than focusing on the long tail catches on.

Sider likens this new chapter in BandPage’s evolution to aggregating what fans waste time wishing and searching for. “There are fan clubs across the Internet, but as fans it can be hard to reach them. We can create a marketplace the way Airbnb and Kickstarter did. We see a huge potential for musicians to make a living off of it.”