Google just announced that it is rolling out a new design for its Gmail mobile web app for Android, iOS, Blackberry and Kindle Fire. The new design looks very similar to Gmail’s recently relaunched iOS apps, with a generous amount of whitespace and larger fonts and icons.

The web app now also features Gmail for iOS’s improved search tool and calendar integration. This means the mobile web app now also offers auto-complete predictions for your searches, and it’s much easier to RSVP to Calendar invites than before.

The Gmail Offline app for Chrome, which is essentially a widescreen version of the mobile app that gives you a two-pane view of your inbox, will also get the same design update. 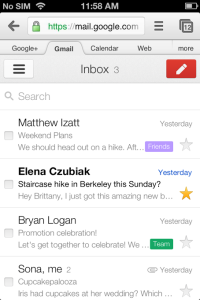 A refreshed look for Gmail on mobile web and Gmail Offline

Since launching the rebooted Gmail app for iPhone and iPad in December (http://goo.gl/2m7pd), we’ve heard from many of you that you like the redesigned UI, along with new features such as improved search and integration with Google Calendar. Today we’re rolling out a similar refreshed look to the Gmail mobile web app as well as Gmail Offline (http://goo.gl/0f1ae) that includes many of these same changes. Try it out at gmail.com in the browser of your Android, iOS, Blackberry or Kindle Fire device. #MobileMonday