It’s debatable whether or not SXSW is still a good place to launch your new hot SoLoMo app, not least because you’ll likely get crowded out by all the other hopefuls, but that isn’t stopping Swarmly from giving it a shot. The app, which quietly debuted on iOS last September, focuses on mainly anonymous, aggregate location data to create something akin to Waze’s crowdsourced traffic data but for people. Today, an updated Swarmly lands on Android just in time to help SXSW attendees find where the action’s at.

Rather than simply enabling users to find what venues are nearby, as many check-in and local review apps do, Swarmly is much more about the here and now. Instead of checking-in, thus contributing to a database of historical location data, users toggle the ‘pollinate’ functionality so that their whereabouts begin contributing to any nearby ‘swarms,’ which are tied to specific locations in Swarmly’s ever-expanding database. Those swarms then appear on a map, giving a quick real-time overview of which areas, events, bars, restaurants, and venues etc. are currently being populated.

“We were always frustrated that whenever it came to location there was always a million ways to find out what’s nearby, but nothing to tell you what’s good nearby, right now,” Swarmly co-founder Marco De Nichilo told me last year.

In addition, users can tag swarms to add more social data to locations, a simple form of curation. And in fact, the Android version of Swarmly introduces some gamification to encourage users to do so. “We’ve added a fun, simple scoring system for people to competitively tag swarms and gain points for reporting the buzz in their city to be the king or queen bee,” says De Nichilo. 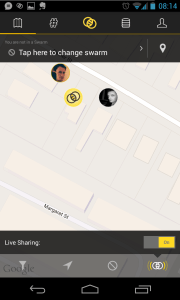 The startup is also experimenting with making location-sharing even more real-time by enabling what it’s calling live sharing. Instead of only contributing to nearby swarms as users ‘jump’ location, they can share their location, semi-anonymously, live.

With this feature enabled, a user’s avatar moves across a map in real-time (aside from a small photo, no other explicitly identifiable information is displayed). The idea is to make it possible to follow friends as they move from one swarm to another. “Like a massive multi-player Google Latitude that highlights the currently popular places around you in real-time as it happens,” explains De Nichilo.

However, as I noted when the iOS version of Swarmly debuted, the aggregate nature of the app’s utility requires that it achieve a boat load of network effects to be useful, something that the startup will be hoping SXSW can, at least temporarily, help with.