Our furry friends are often labelled our faithful companions, but their loyalty can often come at a price. We humans must accept the responsibility of their care and tolerance for some of their less-savory traits, such as the bouquet of their breath, the piling of their pelage, or the proliferation of their poop. To ease the burden, Indiegogo inventors have been applying creativity to address each of these options to help enable our animal friends to come closer to matching the clean convenience of the immortal robots destined to replace them in the future. 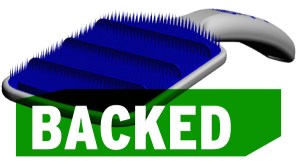 Backed Orapup. As Ralph Wiggam once keenly observed, “my cat’s breath smells like cat food.” Wouldst that were the worst scent to emanate from the mouths of our furry friends. Believing dogs’ barks to be stronger competition for their bites than often given credit for, 75 year-old dentist Bob “I put the ‘wag’ in” Wagstaff has developed the Orapup, a mouth cleaner for dogs designed to drive the halitosis from your havanese. Given that oral hygiene isn’t at the top of dogs’ natural gifts, Dr. Wagstaff developed brisket-flavored bristles that encourage the hound to lick its way to minty freshness, or at least a less obnoxious odor.

After raising nearly $63,000 in its Indiegogo campaign, the Orapup is now available for preorder at Amazon.com for about $16, but isn’t due to arrive until December, where it may offer holiday comfort to Lucy Van Pelt and others who have contracted dog germs. Unavailable to the late adopters who use such a traditional channel is the “I kissed my dog and I liked it” t-shirt that was offered to those who pledged $95 and described by the campaign page as “delightfully inappropriate.” 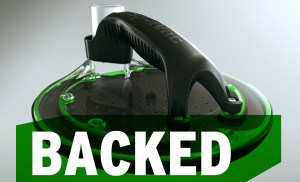 Backed: The SpotVac. The idea of a device to clean up spills isn’t intrinsically a pet accessory; indeed, the SpotVac also claims to effectively suck up milk, paint and other stray substances. That said, it sure can come in handy if any undesirable solids, liquids or gases have been transferred from your pet’s body to your carpets. Such is a highlighted application for the $120 SpotVac Pet Odor Pack, which attaches to an inexpensive wet vac to permeate carpet stains “the way the professional does it” and without using an “aggressive chemical,” such as sodium punch face. The highlight of the SpotVac video, seemingly excerpted from a future infomercial, involves the inventor’s mom nose-diving into her dining-room carpet twice and describing the lack of dog-related smell to be “like a Christmas miracle” (although one would be hard-pressed to name which one exactly).

For now, the makers of the SpotVac need to suck up to the crowdfunders a little better, as they’ve reached a bit less than half of their $25,000 goal. However, there’s still about 23 days left in the campaign in which to prove that this dog can hunt. 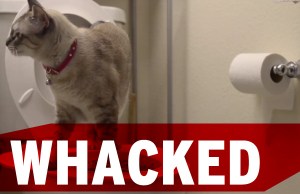 Whacked: CatMan-Doo. Cats may no longer be the widespread object of worship that they once were to ancient Egyptians, but they have many exceptional abilities, including balance, the ability to infiltrate Internet message boards and social networks, and, yes, the ability to use toilets. Getting your feline in line when it comes to eliminating the litter box is the goal of the CatMan-Doo, a toilet seat for cats intended to impart potty training within three weeks and then remain on the toilet to accommodate kitty. As the campaign site admonishes in threatening bold, all caps, and an exclamation point: “DO NOT EVER expect the cat to use a human toilet seat!” (Yes, but what about CatMen?)

The CatMan-Doo system, starting at $39 for a cat-show special, was supposed to ship in February. The backers attracted only a bit over a third of their $10,000 goal, but they get to keep all the money raised via the Flexible Funding campaign, enabling them to purchase at least a one-way ticket to Katmandont.