This is the first Android device I would feel comfortable using on a regular basis.

That doesn’t mean I’m going to, but I would be just fine with it.

If I had to boil down my thoughts about the Nexus 4 into two sentences, those would be them.

Of course, I don’t have to boil down my thoughts and I will elaborate below. But I’m not sure I’ve ever been asked as much about a device as I have about the Nexus 4. Maybe it’s because of the limited availability. Maybe it’s because it’s supposed to be the best “clean” Android phone yet. Or maybe it’s the growing sentiment that Android itself is finally getting closer to iOS/iPhone and maybe even surpassing it in some ways.

Of course, with the latter, we seem to hear that every year. Gingerbread was going to be the version of Android that was better than iOS. Then it was going to be Honeycomb (Android tablets were finally going to take off!). Then Ice Cream Sandwich. Now Jelly Bean. Later this year, we’ll hear the same about Key Lime Pie (or whatever it will be called).

Here’s the thing: the most recent versions of Android almost remind me of something developed by Apple. Not necessarily in the fit and finish, but in the methodical way in which they are improving. It used to be that new versions of Android brought sweeping changes to the entire OS. Recent versions seem to be more about refinement — which I think is a good thing for both users and developers.

With the underlying layer of Android now up to snuff, Google can and has focused on getting more of the little things right. And I think that’s why I’m finally getting comfortable with Android: it’s both familiar (as I’ve tested many Android devices now) yet distinctive and fairly polished.

There’s been quite a bit of talk recently about some prominent iPhone users making the move over to Android. I don’t think this is purely coincidental — there’s a lot to like about Android now and it does seem to be evolving at a faster pace than iOS.

But I’m not going to make that move. And I won’t even say “yet” because that implies that I’m waiting for it to happen. Maybe it will happen, maybe it won’t. I want to be using what I consider to be the best device, and I still consider that to be the iPhone.

But in a world without iPhone, I could definitely see myself using the Nexus 4 as my smartphone. It is a really good device — one that Google should be proud of. Beyond the aforementioned Android software evolution, the Android hardware is also evolving nicely — even just the Nexus line of products.

The first thing you’ll notice about the Nexus 4 is that it’s not really anything like an iPhone. Unlike some of the Samsung-built phones, LG and Google went in another direction. It’s significantly wider than the iPhone 5 and a little taller too. I’m not a huge fan of the form-factor, but plenty of people will be. The larger screen enabled by these larger dimensions is obviously nice.

If the iPhone 5 feels like holding a precious item, the Nexus 4 feels like holding a solid one. Previous versions of Nexus devices have always felt a little bit cheap to me — I actually think the Nexus One was my favorite from a pure built-quality perspective. The Nexus 4 does not feel cheap, but it doesn’t feel as high quality as the iPhone 5 either. Maybe I like it simply because they finally got rid of that silly tear-off backing that Google seemed to be so fond of for a while there. God I hated that “feature”.

The Nexus 4 is the first Android device I can remember where it’s distinctive enough for me to recall what it feels like when I’m not holding it. The iPhone has always been this way. Again, I think this is a testament to Google and LG. It’s not just some plastic-y black slab crammed with specs, it’s designed.

And I fucking love the wireless charging orb that Google just released. Pardon my French. Actually, don’t. I fucking love that thing. Apple needs to copy that pronto. It’s by far the best smartphone “dock” I’ve ever used. And it’s a billion times better than Apple’s current iPhone 5 dock — because no such dock exists. I know it’s a little thing, but coming home and just slapping the Nexus 4 down on a magnetic charger is such a nice touch. And yes, I know there was a similar dock for the Palm Pre, I had one — sadly, it seems the 20 other people who bought one weren’t enough to keep that company afloat. 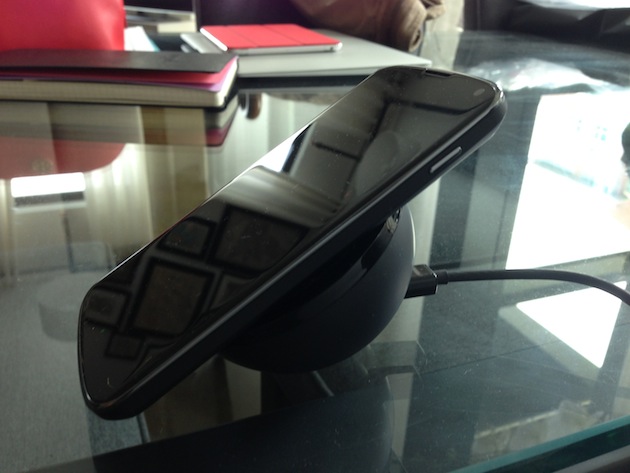 Yes, it sucks that the Nexus 4 doesn’t support LTE. The reasons seem to be extremely lame — okay, bullshit — but I don’t necessarily consider it a total deal-breaker either. Perhaps due to network saturation, Verizon LTE speeds in San Francisco have fallen back to earth from their initial highs. I notice a difference between LTE and “high speed” 3G, but not a huge one.

The bigger factor for me has been the T-Mobile network coverage itself, which seems far less reliable than Verizon (again, in the Bay Area). Because the phone is unlocked, you can use it on AT&T as well, but still not at LTE speeds.

Other spec-y stuff: the battery life seems solid — on par with the newest iPhone. The internals are clearly quite fast — by far the fastest Android unit I’ve tried yet. The screen looks great — though not iPhone great, and it is noticeably worse in direct sunlight. The camera is decent as well — though, again, not iPhone 5 great (Google has finally improved the camera software too).

One example: I was on a trip to Germany recently and opened Google Now on the Nexus 4. Suddenly, everything I had been searching for on my computer — a venue, a restaurant, the weather, a train — were all right there with up-to-date information. When it works — and there is still a ways to go — it’s magical. 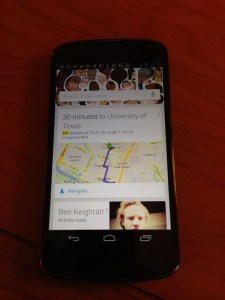 Google’s built-in voice search also destroys Siri. There’s no pussyfooting around that. It’s not even close. The good news is that you can access Google Voice search from the Google app for iOS as well. And rumor has it that Google Now is coming to iOS shortly also — and maybe as a part of the Chrome app?!

Google Field Trip is another fun — yet unrefined — Google service. Of course, that just launched on iOS yesterday.

The main things I miss when using the Nexus 4 remain my favorite iOS apps. Mailbox, Albumatic, Vine, Moves, Clear, Applauze — all nowhere to be found. Yes, a lot of those are companies I’ve invested in — killing it! — but the point is that a lot of young startups still choose to launch iOS-first for whatever reason. For some apps, that’s changing, for some it’s not. It remains an issue for Android.

I do like — and find it interesting — that some more established services are using Android as a testing ground for new app functionality. Tumblr and Foursquare are two that jump to mind here.

When using the same apps on iOS and Android side-by-side, you still notice that the iOS apps still run a bit more smoothly and seem to perform better. Each new version of Android seems to fix this a bit, but we’re not at parity yet. People will try to debate me on this, but there is no debate. We’re not there yet. I don’t know if that’s an Android issue or a developer issue, but it remains an annoyance. The good news is that if you aren’t using iOS on a daily basis, you’re less likely than ever to notice.

Probably the biggest thing I miss about my iPhone when using the Nexus 4 is iMessage. A few years ago, I would have never expected that text messaging would be a key lock-in feature — well played, Apple.

It’s impossible to deny that Google is getting closer to iOS/iPhone in terms of quality with Android, and with these Nexus devices in particular. Maybe that’s bad news for Apple, or maybe it will push them to innovate faster. Either way, I see this as a win for consumers.

John Gruber wrote something recently that came to mind when writing this review:

Windows 95 was vastly improved over Windows 3; the classic Mac OS had barely evolved in a decade…

To be clear, I don’t think it’s fair to say that’s happening here yet, but it’s something to think about. It has been said before, and it rings true: Google is getting better at doing the things Apple is good at faster than Apple is getting better at doing the things that Google is good at. We’ll see what the shakeup at the top of the iOS and iCloud teams yields…

At the end of the day, I’m still firmly rooted in the iPhone camp. And it’s still difficult — though less difficult than ever — to see that changing. One reason that it took me so long to get this review out there is that I was trying to use the Nexus 4 as my only device, but just couldn’t. iMessage, iCal, the apps I needed to test, etc, made it very hard. Again, I’m not sure I see that changing. But I look forward to whatever Google is working on with Motorola. And I look forward to Key Lime Pie. And I’m sure more Apple diehards than ever will be watching closely to see what exactly iOS 7 will entail.

For now, the iPhone still wins the debate in my mind. But I’m finally ready to acknowledge that there is a debate — and a healthy one at that. 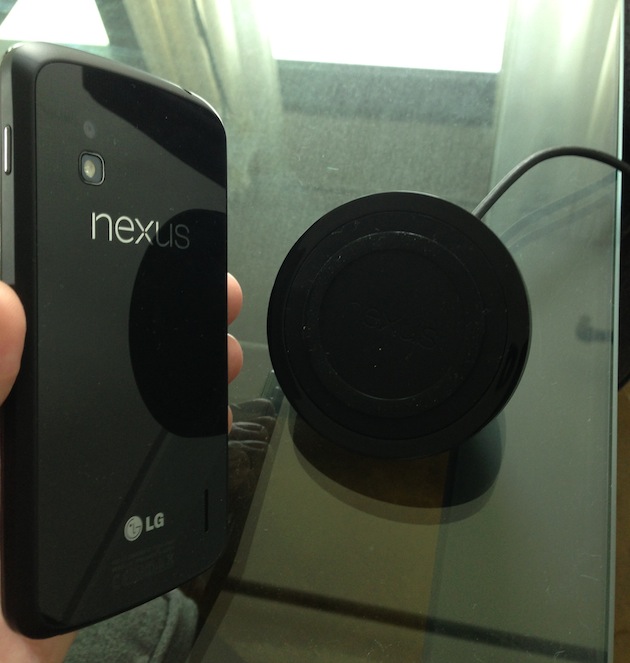