Spindle, the location-discovery app from former Microsoft engineers backed by $2.3 million in funding from Polaris, Greylock, Lerer, SV Angel and others, is today releasing the biggest update to its iPhone application yet. With version 2.0, the app introduces keyword-based search, configurable and personalized “search alerts,” and expands its coverage to include Austin, Chicago and Seattle.

The startup, for those unfamiliar, is aimed at helping users find nearby businesses and events – somewhat similar in spirit to Foursquare’s Radar, Google Places, or Yelp, perhaps, but entirely different in terms of execution. The company has built up its own database of places, focused primarily on popular categories like food & drink, nightlife, shopping, and deals & recommendations. That database is created on top of Twitter and Facebook – to be included, businesses just have to make posts on these social platforms. 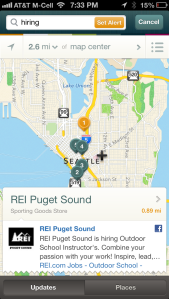 The way Spindle recommends businesses to users is different, as well. The app considers signals which other local discovery applications may not, including things like time of day, and most importantly, terms and phrases businesses are using in their tweets and Facebook updates. Spindle’s emphasis on social is its standout feature, in fact, and the key way it differentiates itself from the competition. Instead of relying on check-in data (as Foursquare does – and still needs, apparently), Spindle uses these social updates to figure out what’s trending right now.

With today’s update, Spindle introduces a more traditional tool for finding businesses with keyword-based search, but the more interesting new feature is the introduction of “Search Alerts.” This allows you to specify custom topics you want to track, like for example, “kids eat free,” “live music,” or “open position.” Once configured, Spindle will track your location via GPS and when you’re near a business sharing updates that match your terms, you’ll get the pop-up notification. It’s an almost Google Now-ish-like way to discover things around you, as the alerts pop up proactively and automatically. These alerts are based on your pre-configured interests, so there’s a bit of initial data input involved, but they’re something which would have required much more manual efforts on an end user’s part to surface before.

As noted above, the other main addition today is the expanded city coverage. Spindle was previously available in the San Francisco Bay Area, New York City, and Boston, and it’s now launched in Seattle, Chicago and Austin. Yes, just in time for SXSW.