Amazon is cutting deep in its bid to compete against Google Compute Engine and Windows Azure as the cloud platform of choice for enterprises. Today Amazon Web Services it announced discounts of up to 27% for EC2 Reserved Instances running Linux/UNIX, Red Hat Enterprise Linux, and SUSE Linux Enterprise Server, and up to 65% compared to on-demand instances. The move is a sign of how Amazon continues to shave margins — something it can afford to do because of its scale.

As my colleague Alex noted recently, Amazon’s business model in enterprise services (as it has been in consumer as well) has been to offer very thin margins on products and make up instead on scale. Amazon, as of December 2012, had dropped its prices some 23 times since first launching enterprise services in 2006.

Here is the breakdown of the current discounts. 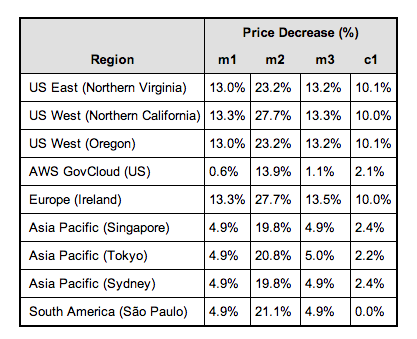 Amazon’s Jeff Barr, in a blog post, writes that the prices apply to purchases made on or after today, March 5, and it provides a guideline for how to buy: those running servers less than 15% of the time should stick to on-demand; those between 15% and 40% should opt for Light Utilization Reserved Instance; between 40% and 80% is Medium; and higher than that is Heavy.

The move comes as Amazon also continues to build out its AWS portfolio. Most recently, it took its Redshift data warehousing offering global after launching it last year in a limited release. It is also offering, for this month, free extra consulting services (automated) via its AWS Trusted Advisor service, which uses big data (in this case taken from Amazon’s own records of how its own customers use its service) to monitor your company’s own usage and recommend ways to save money and improve performance.

Amazon is cutting deep in its bid to compete against Google Compute En...