With just a few taps on the screen of your iOS device, Snaptee lets you turn your photos into stylish graphic t-shirts and sell them. Ten thousand designs have already been created by the app’s users since it went live in July and now the Hong Kong-based company’s founders have secured $600,000 in seed funding from a group of Hong Kong and Singapore investors, including Yat Siu of Outblaze Management Team and Animoca, Chris Lee of 6waves, Mikaal Abdulla from 8 Securities (a Techcrunch Disrupt Beijing finalist), Singapore-based angel investor Emanuel R. Breiter and Hong Kong-based investor Tytus Michalski of Fresco Capital.

Snaptee founders Wai Lun Hong and Gary Lee’s previous project was Hong Kong daily deal website Gobuya, which the duo launched in 2010 and bootstrapped to $5 million revenue in two years without outside funding. Though there are plenty of DIY t-shirt websites out there, Hong and Lee figured they could make a better platform for people without a design background.

“There are so many t-shirt startups on the web, but we didn’t think the user experience made sense,” Hong told me. “It takes too much time to do each design. We thought why don’t we make an app that not only allows you to create a t-shirt in 30 seconds, but also gives your design the chance to go viral?

“As a company we are looking to re-wire the t-shirt industry,” he added. “We want to change how people design, manufacture and wear t-shirts.”

On Snaptee, you can access pics directly from your Instagram account, albums, or take a photo within the app. The app has a photo editor that allows you to adjust the saturation, contrast and brightness of your image, six filters, and 20 templates, including several with spaces for text and overlays in trendy geometric patterns that turn even the most humdrum snapshot into an eye-catching abstract design. 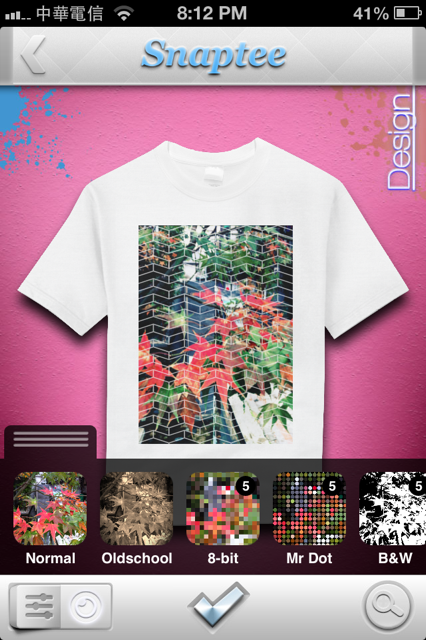 SnapTee also functions as a marketplace, with users given the option to make their designs available for purchase (prices are currently $19.99 for your own designs and $24.99 for shirts by other users). Hong hopes people will turn Snaptee into a habit–the company wants to build up a base of users who create T-shirts on a daily basis before scaling up production.

One nifty feature is the option to let other Snaptee users “remix” your core t-shirt design, creating a collaborative (and sometimes surprising) design process. In fact, Hong says he doesn’t want Snaptee to just be a t-shirt retailer–he also wants it to be a platform for budding designers. The company has spent the last ten months building a gallery of user designs, which can be viewed on the app or online on the Snaptee website.

Snaptee offers free international shipping and orders usually take about two to three weeks to arrive, though Hong says that one of the company’s priorities is to smooth out logistics and speed up its distribution network. Snaptee will also use funds from its seed round to develop the app’s UI and find more marketing channels, with the U.S. and Japan as its target countries. An Android version is also in the works.