NoshList, the restaurant waitlisting app for iPad launched just over a year ago, is today making its way to smartphones, including both the iPhone and Android devices. Although possibly not the ideal form factor for the job, the mobile app allows restaurants to test the NoshList experience on devices they likely own, before making an investment into a tablet (or multiple tablets) to run the full-screen version. In addition, the new mobile apps can serve as backup if the restaurant’s Wi-Fi connection ever goes down, as they’ll maintain connectivity, whereas the more affordable, Wi-Fi only iPads would have lost their signal. 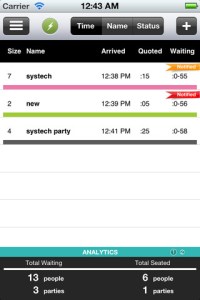 Though both the free and paid applications provide some data, the NoshList Premium application ($49/month+) gets into more detail, allowing for things like richer, in-app stats, an exportable analysis of the past 30 days, email summaries and more. Both versions also allow restaurants to alert diner when their table is ready using phone or text, eliminating the need for costly pager systems, and the Premium app also allows customers to respond by texting back.

In May 2012, around 75 days after NoshList’s launch, the company announced it had sat 1 million diners, primarily in restaurants across San Francisco, New York, L.A. and Boston. Today, it has reached over 8 million diners, across 2,250 restaurants. The service has expanded to reach more markets as well, aided by a deal with Red Robin which now uses NoshList in all its corporate-owned restaurants nationwide. (The majority are not franchises.)

There are a lot of companies in the restaurant management space, including NoWait, OpenTable’s ERB, Livebookings, Timeview, Tableista, DinerConnection, WaitList Manager, TurnStar, Table’s Ready, BuzzTable, and Urbanspoon’s Rezbook, to name just a few. Some compete more directly with buzzer systems, while others are more focused on call-ahead reservations. But NoshList has the potential to grow into a more robust product as well, given that the company also operates a consumer-facing mobile app called Nosh which offers diners suggestions on what to eat, based on other diners’ recommendations.

In the past, Walker talked about deeper integrations between the two, allowing consumers to add or remove themselves from lists, view wait times and more. Given today’s debut of NoshList for smartphone devices, those integrations are likely on the horizon.

NoshList for iPhone is here, and the Android app is here on Google Play.